A couple weeks before the Tough Sucker Ride, my friend and I headed out for a training ride with our two barefoot ponies. We wanted to really get some riding in, as our winter had limited us to the sand draws and flat roads around the ranch, which had left us itching to get out and really ride! We hauled a few short minutes up the highway to the head of Spring Valley Ranch, which recently sold its property to a development company. We have ridden these mountains for years, usually parking at the ranch which is operated by a friend of ours. Considering the development company has actually committed to saving the trails and allowing equestrian access, we decided to forgo parking a few miles up the road at the ranch and parked in the designated horse-trailer parking lot and headed out on foot through the paved roads of the neighborhood. Wish I had pics of my friends tough gelding hop-skippity-hopping through the man-holes!

Although I had been riding Replika completely barefoot, I decided to pack boots just in case. She had been doing wonderfully completely bare throughout our rides this winter, but considering we didn't exactly know where we were going, I figured I would rather be safe than sorry! I shoved two Easyboot Gloves into my Stowaway Cantle Pack and off we were! 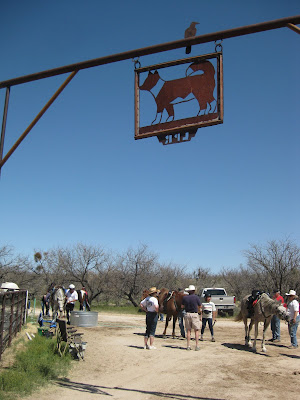 To get a better feel for endurance riding I volunteered at a "local" (= 1 hour from the WD) ride. It was being held at the Lucky Pup Ranch, whose owner sold me my new saddle. Rather than being in the foothills of the Dragoon Mountains, where we are, this was in the foothills of the Rincons. The weather was absolutely perfect for the event.
I was given the opportunity to be a pulse-checker, of the horse that is, but declined because I am still slow at detecting a horse pulse and did not want to hold up any competitor. This was a 50 mile and a 25 mile ride, with a 15 mile fun ride thrown in for good measure.
So I was stationed in the outback, at a gate with a watertank and my job was to ensure the cows would not get out. I did have the opportunity to see the 50-milers leave and it was interesting to see the different horses, different tack, different ways of dress, and different attitudes toward the horses. Some people are out for the competition, others just to enjoy the scenery and have fun. After all, the motto of the AERC (American Endurance Ride Conference) is "the finish is to win".

We are Tough Suckers

Karen's Horse Trails Blog- http://karenshorsetales.blogspot.com/2010/04/we-are-tough-suckers.html
We left home in high winds and driving rain mixed with snow Friday on our way to the first ride of the season, Tough Sucker. This year the ride was held at Regina Rose's a few miles out of Oreana, Idaho. 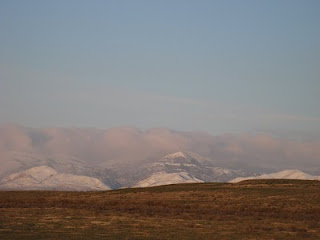 Regina's place is near the site of the Utter Disaster, a bit of early Idaho history. On September 9, 1860, the Elijah P. Utter wagon train was attacked by Indians along the South Alternate of the Oregon Trail northeast of the present day town of Murphy, Idaho. The attack on the 44-member wagon train resulted in the deaths of 11 emigrants and an estimated 25-30 Indians.
The view of the snow covered Owyhees greeted us Saturday morning. The wind was cold but at least we had sun. The rain and snow had subsided and there were two brave riders on the 75, about 30 on the 50 miler and close to 20 on the 25. Considering the weather, it was a great turnout. I had planned on the 75 myself but decided Friday that there was no way I was doing 75 miles in that cold cold wind. And I'm glad I just rode the 50.
Thunder was really good at the start and we teamed up with Lynn White. Her mare Agnes traveled the same pace as Thunder and it was a great day! I had many layers of clothes so I wasn't cold even in the wind. Actually everyone was so buried in layers of clothes that it was tough to know who was who. We went out to Wild Horse Butte and along the Snake River. We passed through the Birds of Prey area and rode a portion of the Oregon Trail. The footing was fantastic!
This was also our first endurance ride in the Easyboot Gloves on Thunder and they worked beautifully. We did have one gaitor rub but a little vet wrap took care of it and he was fine. We did the 50 in a bit over 7 hours finishing 12th. We vetted through with no problems and I thought he looked great!
What a day! We all earned the title of being tough suckers! An apprpriate name for this fun but cold ride!!

Karen's Horse Trails Blog- http://karenshorsetales.blogspot.com/2010/04/we-are-tough-suckers.html
Posted by Endurance.Net at 7:55 AM No comments: