This is the closest ride to our little farm. It is listed as being in Kinmundy but is really near Salem IL. Actually the ride is at Omega. Omega is “town” of about 20 people and a country store that has good ice cream, beer on Sunday and electronic gambling. We have competed there many times. By that I mean Dead Dog Creak, not at the store. Only once has mud not been a part of the ride. The mud has been so bad in the past that the following is all true:

1. The co race director face planted into a mud hole one year at speed. I seem to remember he won the 50 but the back of his head was the only thing not covered in mud.

2. The course became so wet and muddy after a night time of rain, that it was changed to a road ride. One of our twh mares, Kate , won that ride but I really dislike riding on roads.

3. I rolled a saddle one year climbing a muddy hill in the rain and slid down the hill on back in the mud.

4, They moved the ride from May to June to avoid the rain and resulting mud.

It did not work, the rain and mud found the Dead Dog Creek Ride anyway...

Read more here:
http://shawneesunrisefarm.net/wordpress/?p=294
Posted by Endurance.Net at 7:30 AM No comments: 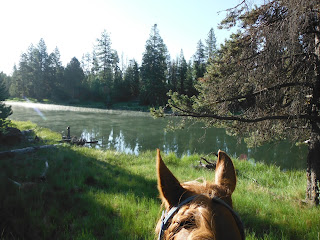 I recently had the privilege of traveling to Bend,OR with my friends Layne Simmons, Nance Worman, and new friend Lindsey Hammond. The plan and goal was the Sunriver 100 mile Endurance Ride. My last time here was 2010, which seemed like eons ago. I wasn't so sure with my hip problems that I could do a 100 miler. But Thunder and I were going to give it a go.

We arrived mid day on Friday and set up our camp. Harley, Thunder and Quinn were all pretty happy and content. We lined out our tack, our snacks and then our vet bags for the out vet checks. It was decided that Lindsey would go to the "river check" as we would pass through there twice. Then onto the last out of camp vet check on our return to camp. Everything finally got organized for three of us. Thunder was the only one who would eat his beet pulp mash with the electrolytes in it so I had to try and keep his BP separate from the others.

The ride started at the butt crack of dawn as we headed for the start. My usual riding buddy Trish Frahm caught a shot of us in the morning cold. There was frost on everything!...