In a country more than twice the size of Texas but with a population only the size of Houston, one finds open land, peace and serenity. Just over an hour’s drive outside of Mongolia’s capital city, Ulaanbaatar, a piece of paradise awaits discovery from the saddle.

The Mongolian horses live in an almost wild state, have an incredibly smooth gait and seemingly endless endurance. Horses are kept as nature intended, and the herdsmen share a silent connection with them, their unwritten traditions passed down through the generations. On horseback is the perfect way to experience this country.

I watch a herd of 40 horses cross the river that runs through the land owned by Baagii and his wife, Saraa. A mare tied to her foal coaxes it across. Instantly falling in love with this country, I would soon discover that the people are as genuine as its beauty.

The herdsmen live as nomads, moving their portable round houses, called ger, to greener pastures. The wooden accordion-style sides of the ger fold up, the center columns that support the roof slats all come apart, and topped by the felt or canvas shell it lays neatly on a wagon that is often pulled by a yak. Young children fetch water from the river; women milk mares and ferment the liquid to make the famous beverage called airag. Yogurt, cheeses, curds and other food staples are made from yak, sheep, cow and goats' milk. Cashmere is spun from goat hair. The Mongolians of the countryside live a tough yet peaceful and sustainable life off the land.

I arrived at the ranch with tour coordinator Julie Veloo and her husband, Chelvan. Julie met Baagii and Saraa many years ago while living in Mongolia and paired up with them to organize horseback riding adventures. Thirty percent of the profits go to the Children of the Peak Sanctuary, a kindergarten Julie raised money to build in the Ger district of Ulaanbaatar...

Posted by Endurance.Net at 8:17 AM No comments: 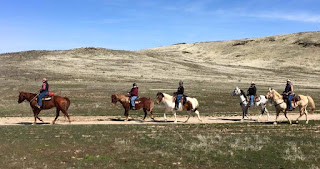 We had a great group of people for the 2nd ever Endurance 101 Clinic near Adrian, OR.. There are few things in this world more gratifying than making new friends, sharing knowledge, spending time with old friends, riding horses and eating calorific food! How can you beat that?!

We had sun, wind, bugs but we managed to do our "classroom" stuff where we chatted about what endurance rides are, clubs and organizations, feeding, conditioning, pacing, managing your horse and a whole lot more. Then I shared my contents of a crew bag that would be handy at the vet check. Then we hid from the wind and had lunch. I shared easyboot information with Amy Heward. Shoulda got a pic of that! Oh darn we should have gotten a pic of a lot of things but we were just busy.

After lunch everyone learned how to take their horse's pulse and listen for gut sounds. The wind made that a challenge as we were suddenly deaf and found it hard to hear what we were looking for! We then had a mock vet check with Virginia Ware and myself impersonating vets and examining horses, telling riders what we were looking for and why. Each person had a rider vet card to work with. They trotted their horses out just like a real check. Giving them more to know when it comes down to the real thing...

Posted by Endurance.Net at 9:00 AM No comments:

Having “Fun In The Sun” - Chase Endurance

Jill, from Connecticut, and I arrived at Orlando Airport in Florida at roughly the same time on the afternoon of Thursday, March 10th to begin our three-hour journey to the Fun In The Sun (“FITS”) Endurance Ride in Williston, Florida. We rented a little economy car for which both of our large luggage bags just barely fit. Thankfully we were only bringing our riding clothes, hydration packs and riding boots and not saddles, as that little car was jammed packed.

We had both leased young horses from a Canadian veterinarian who was living in the area with her stable of endurance Arabians. When we arrived, we were greeted by a very sullen and disappointed horse owner who was pulled from the 100 mile for lameness. We were also advised that the horse Jill had originally leased, Style, was lame and was replaced with Lady. This sudden change in horses caused a bit of bewilderment, as Jill had taken out insurance on Style and had to contact the insurance company at 4:58 p.m. and have the insurance changed. Luckily for Jill, the agent answered the phone and helped her with the changes.

It was not the greeting or beginning we were hoping for and we wondered if this was foreshadowing for the weekend to come...

Posted by Endurance.Net at 8:51 AM No comments: 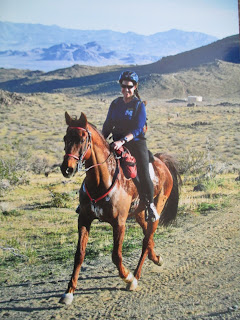 For anyone who reads my posts, I apologize for not writing a blog for so long. 2015 ride plans did not go as planned, but Rio was not injured, so it's all good. Rio and I were both conditioned to start Tevis in August, 2015, but we were not able to start. I wrote this on my Facebook page:

"Caartouche (Rio) and I were on the rider list to start Tevis again this year, 2015, but I had to cancel 3 days before the ride because bad re-shoeing 2+ weeks prior left Rio too sore to start. My farrier and I worked with it the best that we could, but the problem was not fixed.

It is disappointing not to of attempted this challenging, beautiful trail. It was our goal for the year, and Rio and I were in excellent condition not just to start, but to finish as well. We had 100% completions on our AERC rides/races that we did prior to Tevis, with Rio finishing in the top 10 in 2 of our 3 competitions.

Well, it could of been much worse. Rio's soreness was temporary. After successfully rehabbing Rio from two potential career ending injuries, this was a hiccup.

Our next planned AERC competition was to be the third week of August: The Eastern Sierra Classic, which is located only 45 minutes from where I live, in Bridgeport, CA. We completed the LD distance in 2006 as our first AERC competition. We have finished the 50 mile distance 1 or 2 times. The ride was cancelled this year a week or so prior due to one of the many wildfires occurring in CA."

I did not attend any more AERC competitions in 2015; instead, I enjoyed the beautiful trails in the Eastern Sierra where I live. On October 12th, I broke my ankle/acute sprain, which put a hitch in my getti-up. No surgery, but walking cast and non-weight bearing for a month and then physical therapy for 10 weeks. Luckily, two days prior I had moved Rio back to his winter home at Millpond Equestrian Center in Bishop, where I board him. It is a 75 mile roundtrip drive from where I live in Mammoth, so I normally have my trainer/friend, Rebecca, ride/condition/train him 2 times a week.

Flash forward to last weekend's first AERC competition: 20 Mule Team, 50 mile distance, on Saturday, February 27th. I have only been riding once a week for the last 5 weeks, so my fitness level is about 10% of what it normally is. Rio is 100% fit...

Posted by Endurance.Net at 8:27 AM No comments: