The tradition of the names of Endurance rides is bemusing. “Dead Dog Creek”, has lots of creaks but none of them are named “Dead Dog”. “Red Barn Run” has no barn, but the word is their used to be a barn. “Raptor Run” is named that because the old growth forest made the race director feel like a dinosaur might use her for lunch. “Lincoln Trails” used to be in Central Illinois. If you know history, Illinois is the “Land of Lincoln” because he did practice law in Illinois and lived most of his life here before going to Washington D.C. However, the ride was not in Springfield and is definitely not within a few hours driving of their now. It is listed as being in “Kinmundy” IL. If you go to Kinmundy, you won’t be at the ride because, it is actually at Stephen Forbes State Park and that is in Omega.

Omega has a population of about 30, but does have a general store with great ice cream and beer. It seems the store’s Sunday beer sales keep it going, as it is the only place allowed by law to sell beer in the entire area.

In any event, the ride application clearly stated in bold print, “There Might Be Mud”. Having ridden there several times, I knew they were right. I had Jazz, a 7 year old twh mare, ready for her first 100. She was 2 for 2 at LD, and 4 for 4 at 50 miles. Kate was in foal, so she stayed home. Sandy had Savanah, her 7 year old mft mare, more than ready for a 50. Savanah can fly and was two for two in Lds and 3 for 3 at 50 miles. Now, I am kind of in charge of training schedules in our program and making sure our horses are ready for rides no matter who is riding them, but my Sandy is in charge of “nurturing”. That means a variety of different things. From my male type “A” perspective, it sometimes means “worrying”. But, if “Mama isn’t happy…….” Well, you get it.

Then it rained. Oh, oh, new worries. Then it rained more and the forecast was for a gully washer at the race site the night before. I finally realized I just needed to ride with Sandy in the 50. Mind you, she does not need me to ride with her. Far from it, she won’t even wait for me. The woman, who does not appear to have a competitive bone in her body, turns into Billy Shoemaker when she hears “the trail is open”.

In fact, no one rode the 100 because of the mud. It became a monsoon the night before the ride. They delayed the start to make sure the creeks could even be crossed. This is an Umecra ride and they have lots of rides like competitive trail, Ld, and novice but the field for the 50 was small at 5. This was probably because of the mud. I am never apologetic about the size of a ride. All any of us can do is ride the ride presented to us by the people putting on the ride and ride with the folks that show up to ride. I figure everyone that fails to show up is missing out...

Read more here:
http://shawneesunrisefarm.net/wordpress/?p=288
Posted by Endurance.Net at 8:19 AM No comments: 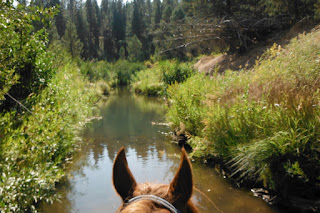 Gold was first discovered near Centerville, Idaho on Grimes Creek August 2, 1862. The discovery started one of the greatest gold rushes the world has ever seen….the richest strike in America, with an estimated take of than $250,000,000 from this area in the two decades following its discovery….greater than the California 49er and of the Klondike in Alaska. Nearby Bannock City grew to 6000 people, with 250 places of business. Bannock City was later renamed Idaho City grew to hold 20,000 miners. Idaho City, became the largest city between St. Louis and San Francisco, until a couple severe fires in 1865 and 1867 destroyed much of town. Even then thousands of miners traveled to the area with tiny towns springing up everywhere. Most have vanished without a trace. But this year Idaho City, Placerville, Pioneerville and Centerville held their 150 year celebration.

Nowadays its all pretty quiet around the area. With the price of gold a few miners have tried their hand at dredging and sluicing out the precious metal but with marginal luck. The area around New Centerville has been home to the Old Selam Endurance Ride for several years. And I love to go to this ride because its just refreshing to go to the hills and creeks. Oscar Baumhoff allows us to invade his space and camp on his property along Grimes Creek. Just out of camp are some large piles of mine tailings from days of long ago. I went up to the ride this year with a very sore back and was determined to ride a day. I popped some pain pills and wore an Absorbine Patch. I told Thunder that he was in trail horse mode which meant slow, steady and calm. With each mile I got better and by days end of up and down hills, numerous creek crossings on Grimes, Elk and Clear Creeks I felt ready for the dance!...

Read more here:
http://karenshorsetales.blogspot.com/2012/09/gold-was-first-discovered-near.html
Posted by Endurance.Net at 8:21 AM No comments:

I walked onto the plane to Mongolia with a sense of considerable relief. The build up to us leaving had been hectic: equipment hiccups, a boxing match, my birthday, then our tickets not being issued until the morning before our departure. All this punctuated by a chronic lack of funds that had caused a limb wobbling crisis, but, with the help of family, friends and our fabulous fans we managed to scrape enough dough together to make it onto the plane, ticket and all!

The flight to Beijing was a four movie flight! I could relax, veg out, eat, drink, sleep and rest my battered body, still smarting from the white collar boxing bout I had fought just three nights before. Boxing has been a fabulous revelation for me. I love it, and along with cycling it has gotten me into the best physical shape of my life. Add to that the fact that stepping into the ring has more in common with riding a belligerent Mongol pony than almost anything else I can think off, and my preparation for our second crack at the Mongol Derby was….well….perfect! The difference of course, is that you feel very much alone sitting on a manic hyper skittish equine in the middle of one of the least populated wildernesses in the world! No baying crowd a few meters away pounding the canvass, witnessing you taking another blow to a bit that wishes it hadn’t. Blood had been spilt in the ring that night and I was still fishing bloody boogers from my nose in the dehydrated air of the plane not realising that, a little over a week later, I would again be bleeding from the nose, having been driven face first into the steppe by my 23rd Mongol pony...

Read more here:
http://www.barryarmitage.com/barry/mongolia-madness-reinvented/
Posted by Endurance.Net at 8:22 AM No comments:

WEC Friday and beyond - Heather Reynolds 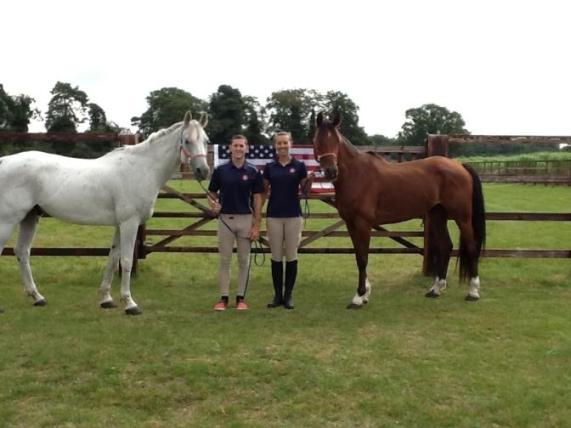 
Wednesday, 29 August 2012
On Thursday evening we had the opening ceremonies. They were awesome as expected. All of the athletes were invited into a big party. There were appetizers and drinks and socializing and then we were all put behind the scenes and organized by countries.

The ceremonies were after dark. It was a small disappointment that not all of the people could be in the seats to watch as there was not enough room. Most of our crew were outside on the grass watching large screens instead of live performances.

All the countries were announced as we marched in with our flag. Then we all sat down and watched the show. It was a variety of dancers, light shows, mounted performances and fireworks, lots of fireworks! Very fun. We had an after party at the barn. It was pretty fun, then headed off to bed.

When we got back to the house my whole family had arrived! My Mom, Dad, Hannah, Jonathan and Dustin. Super awesome.

Friday, Jeremy and I went to the barn very early to get a ride in before the day got busy. At 10:30 our truck arrived to haul the horses over to the venue. It was decided that we would take 6 horses over, due to how the rules were written this time as far as alternates were concerned. Nicki, John, Val, Jeremy, Meg and I loaded up our ponies and made the 15 min drive to the venue. Uneventful.

We hand grazed the horses for a long while and then put them in and took care of things. 4:22 was our countries vet in time and we marched over in uniform and vetted. All but Nicki's horse, Not Tonight, vetted in. It was very disappointing for everyone.

After that we weighed in and things were officially started. Later that day Emmett told us that John, Val, Jeremy and I would make up the team.

When all was done at the barn we headed home and my sister and mom cooked pizza and we ate and went to sleep.

Sat we woke up and left the house at 5 am. Wendy had fed for us early that morning and we didn't start until 7 am. The horses were eating and relaxed when we got to the barn. The whole crew team met at the old barn, not at the race, at 6 am to set out to their points before the traffic started.

Marvel and Kutt were saddled at 6:15 and we started warming up. Both seemed relaxed. We headed over towards the start after a while and joined the masses in warm ups.

At 7 am the announcer announced the start and we were off!! The start was a long shoot with hundreds of cheering fans lining both sides. The horses shot down the stretch through the cheers. Marvel lost Kutt immediately as Kutt was going to be riding faster. Marvel was terrified...

Posted by Endurance.Net at 8:50 AM No comments: