2017 Mt Adams: In which I don't ride my butt off and Fee doesn't run her shoes off (quite) 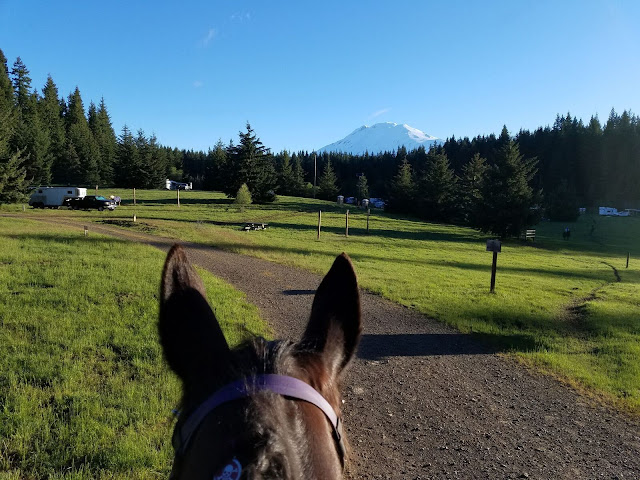 I admit: this is not an "easy" ride. But that's not the whole story.

I'm broke (because of the sudden death of the stupid truck) so ride-sharing was needful. THAT was an excellent reason to team up with Kitty and Mak!

Mak is lovely. He reminds me of all the things I loved about the Toad, without the fear of being boingitied into the ground at random intervals. We ended up telling a lot of Toad Stories on this trip! :-)

The weather forecast for the weekend was "warm and sunny."

The trails were beautiful. Crews had a huge job to clear the winter blowdowns this year--apparently they sawed through 163 trees in a single day!... 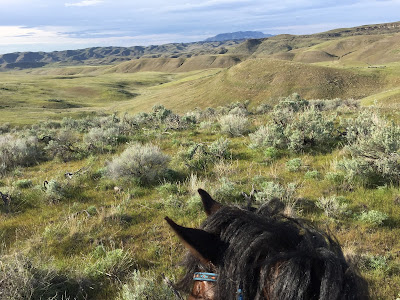 You heard right. The title of this post is an accurate tease. I finally got to and completed a 50 miler ride. For those who know how long I have been drifting on the periphery of the endurance sport – doing an LD here and there – this was a major accomplishment for me.

Long story short of it I am catch riding this year due to Deli being out in rehab. Who knows if Deli will ever be able to do even LDs again? Her rehab is going well, but we’ve hit on the issue of saddles. So I’m in the thick of that again: finding a saddle that fits her given her health needs and fits me and is not super expensive. So far it’s been an impossible task.

In the meantime I’ve been riding and conditioning my friend “M” horse Duke. Duke is fairly new to her – a rescue with some possible harsh treatment in his past (he was likely a dancing horse). Either because of the sketchy past or for some unknown reason his brain tends to go to some unknown place when stressed and he pulls like heck. That, combined with becoming less aware of his surroundings – which can lead to more tripping/ignoring of aids – means riding him can be like being a freight train conductor. A freight train that can canter in place when agitated..! He is a little guy (mustang-arab cross), but very solidly built. Luckily he also has comfy gaits, so when he is hopping all over the place like a loon you at least are not being jarred everywhere.

Observe how adorable this guy is:

So I’ve been riding Duke 1-2 times a week and enjoying the challenge and getting to know him better. The good news is every ride came with some slight improvement. I hope I have been helpful overall, because there is some hope that Duke would be the mount for M’s kid, who has also done endurance.

Two weekends before the planned 50 M and I took Duke and her other horse, Pepper (who has completed Tevis) for a long conditioning ride. We ended up doing almost 25 miles out in the Colombia Gorge area. The general idea for Duke was that because of his pulling and general athleticism, his first ride should be a 50 rather than an LD. We did NOT want him, with his pulling and competitive anxiety-brain to get the idea he couldn’t take care of himself. This conditioning ride clinched it, as Duke still had plenty of juice after that ride despite doing it at an endurance pace...

Posted by Endurance.Net at 8:18 AM No comments: 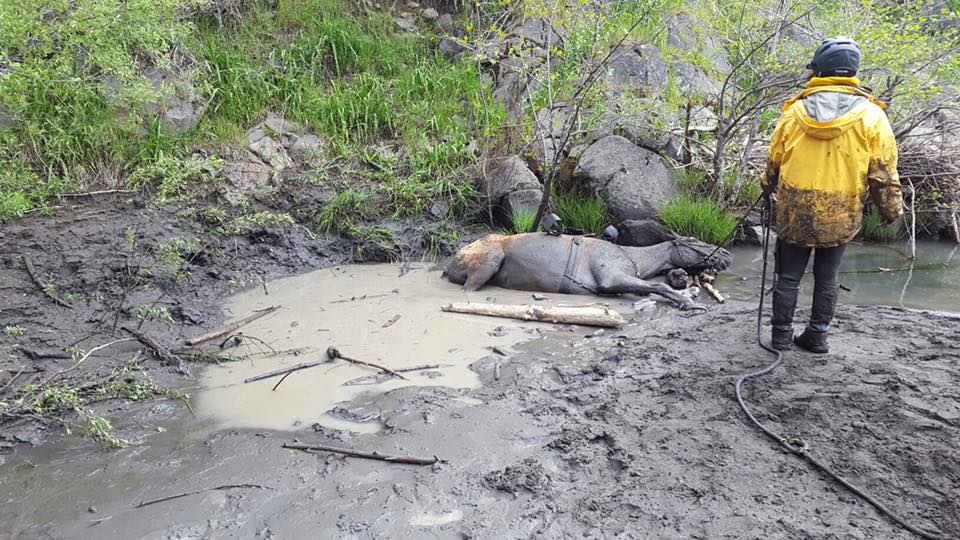 Well the Van Duzen 100 didn't quite go as planned.

Weather was perfect, trail was wonderful (best footing I've ridden on all year). We rode down off the first ridge, along some pavement for a short while, then dropped down below a bridge to cross the river.

I was a couple of minutes behind Carolyn Meier, since we slowed after a junior's horse slipped and fell on the slick pavement. Dropped down the steep wooded bank, saw Carolyn's footprints to the left and followed them. Unfortunately the trail actually went right (missed the ribbon) - we took three steps into some "slightly soft looking sand" and Fergus went down in the mud up to his belly. I came off the side and sank to my knees (and I was on the firmer stuff).

The mud was so sucky I couldn't get my leg out without crawling on my hands and knees, so there was no way Fergus was getting out - there was just no bottom.

Thank goodness I was able to divert our riding buddy Becky Batson behind me off to firm ground so she didn't also sink.

She went around and Andrew Gerhard was right behind us and stopped and came running over. The junior with him, Desiree, held the horses while we tried to figure out what to do.

Andy gathered branches to try and wedge underneath F, but they were too wimpy and the mud too deep (I was sitting in the mud behind him and pushing these things in and they were just going straight down).

Every so often Fergus'd put in a huge effort and thrash around ... and get stuck even further. He was in a small stream, so constant cold water - and getting colder and colder. He started to shiver badly, buried in the mud, stuck on his side.

Becky was holding a rope to his halter to try and pull him towards firmer ground when he did try to get out, but he was so strong he almost pulled her in a couple of times.

I was behind him and almost ended up under him several times because I couldn't get out of the way - stuck in the mud myself.

Shao-lan called the ride manager (note to self - ALWAYS preprogram the RM's phone number at a ride) and after 20 mins of trying to get him out on our own, I called 911 (tricky, since there's no cell reception out here - but I got a call out! And also tricky because I was so covered in mud I could barely get my touch screen to work). Got the dispatcher who thought "maybe we have a sheriff in Weaverville" - miles away
Posted by Endurance.Net at 11:26 AM 1 comment: