Riding Off the Grid in British Columbia - Linda Ballou 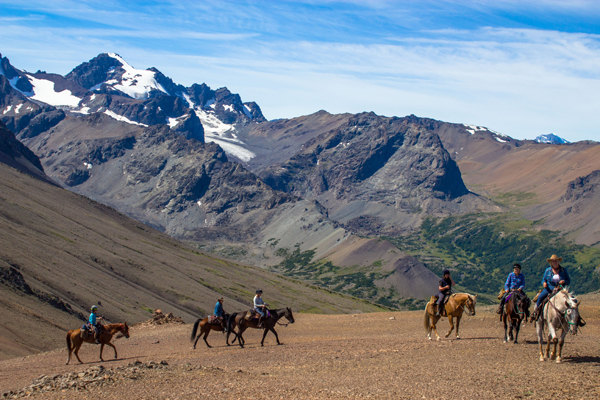 I awoke to a loon’s haunting call floating over the still waters of Chilko Lagoon mirroring granite spires sporting snow in July. The smell of crackling bacon and camp coffee pulled me out of my snug sleeping bag. On the far shore, a moose with her gangly calf trotting behind was the morning news. We were totally unplugged at base camp for the pack trip out of Tyslos Park Lodge through the rugged wilderness of the Chilcotin/Cariboo region.

In the crisp morning air with dew lifting from grassy meadows, seven riders, four pack horses, and two guides headed out for Goat Camp. This is not just a ride, it is a journey back into a time when you could ride for days and see no one. We rode in silence through a grove of quaking aspen to a rocky shore of the Chilko Lake to water the horses. The trail to Goat Camp is infrequently used each season and feels a bit like bush-whacking. It snakes through alder thickets and then begins to climb. Our sturdy, sure-footed horses took on the steep ascent with aplomb...

Posted by Endurance.Net at 9:18 AM No comments:

My Favorite Things: A series of my favorite things of different categories, less formal than a review and more conversational musings. Everything from rides, to tack, to food, to apparel, all following a “Top Three” format. Also, because I’m me, and I’m known for changing my perspective and opinion of such things as favorites from year to year, some of these topics may end up revisited…more than once.

It was hard for me to narrow down my favorite rides, especially limiting myself to the Top Three. I can pretty easily narrow down two…but that third one I just may have to leave as a “rotating space” for now.

Virginia City 100 (Sept 2017)
It’s probably my favorite ride to date, even with not finishing. Yes, that’s how good everything else was to basically negate the Overtime pull. It’ll always be special because it was my first 100-miler attempt. It was a leap of faith, with an uncertain outcome, and I’m still proud of myself for attempting it and taking that chance, even if all the stars didn’t align for a finish.

VC just has the best atmosphere. Given that it was the 50th anniversary ride when I rode it, it was larger that usual, with over 70 entries…but normal years has entries usually between 40-50 people, which makes for a very laid-back, more intimate type of ride. I love that it’s a 100 only, so everyone in camp to ride is there to do that ride and that distance. Kind of hard to describe, but it gives it a different feeling than other rides...

Posted by Endurance.Net at 9:16 AM No comments:

There’s some trail wisdom out there that states that “The first 1000 miles are the hardest” when it comes to endurance and the learning curve.

Considering it took me 13 years to get there, I would say I made the most of that curve. But I finally did it…at least, if you’re counting combined miles (which, hey, I’ve learned just as much off of some LDs as I have longer distances).

1,015 endurance + LD miles. 12 seasons of endurance. 15 different horses (and only 1 of them mine), everything from greenies on their first ride to “hold my beer and watch me show you how its done” experienced campaigners. One heck of a learning experience…and I still feel like I’ve barely scratched the surface...

Posted by Endurance.Net at 2:06 PM No comments:

EDITOR’S NOTE: This is the last of three parts about a truly unique horse.

The spring of 1976, I was riding Ahmahl to move cattle and he trotted through some sharp rocks to head a wayward cow and stone bruised a front foot. He was lame for several days.

The bruise abscessed; we had to open up his sole, drain it and soak it. The infection cleared up, but he had a big hole in his sole that would take months to fill in.

Even though the abscess was healed, I couldn’t ride him. It was such a big hole that I kept his foot wrapped so he wouldn’t get dirt and gravel in it walking around in his pen. I thought about shoeing him with hoof pads, but that would not be enough protection. We decided to weld a metal plate onto a shoe, to cover that hole in his sole.

My husband Lynn created a special shoe for Ahmahl. The hole was an inch behind the toe of his foot, a little to one side, so Lynn cut a piece of flat metal the proper size and welded it to the shoe, to cover that hole. I put that shoe on, and started riding Ahmahl again.

When it came time to reset his shoes, Lynn created another “armor plated” shoe for the other front foot, to help keep it from stone bruising — since Ahmahl had such flat feet — and balance his stride, so he’d have the same weight on both feet. Lynn welded hard-surfacing material (borium, which is tungsten carbide used on drill bits) onto both shoes so they wouldn’t wear out in the rocks. This material is harder than diamonds and kept the metal shoe from wearing away. We were able to use the same shoes the rest of the summer and didn’t have to keep making new ones.

With his special shoes, Ahmahl happily trotted and galloped through rocky terrain with no fear of hurting his feet, chasing cows and competing on three more endurance rides that year, placing first on two of them and fourth on the other...

Posted by Endurance.Net at 2:04 PM No comments: