In a roundabout way, I ended up with a ride entry to Bumble Bee via the Convention raffle (friend won it, but wasn’t going to be able to make it to the ride, so offered it to me), but found myself with none of my prior catch rides available. So I let a couple of friends know I was available and looking for a horse, and left it at that. Worse case scenario, if I couldn’t find a ride, I would be able to transfer my entry to next year, and I would go up and volunteer.

A week and half out from the ride, I got a Facebook message from Troy Eckard, with an offer to ride his second horse, Flash, if I was interested. It was an offer than needed no thought whatsoever, and within seconds, I was on the phone confirming that “yes, please, I would be quite interested.” Flash is experienced, with over 1000 miles and a Tevis completion last summer, and this ride was to serve as another notch in his conditioning belt towards Tevis this summer.

Of course, the weekend before the ride, I started battling a head cold, but spent several days throwing every kind of odd concoction I could find down the hatch, and I think the cold germs finally just gave up in disgust and fled (granted, apple cider vinegar, lemon juice, honey, ginger, cinnamon, cayenne, and horseradish is a little odd, but I promise, it tasted better than it sounds or smells), because I was feeling completely back to normal by the Thursday of ride week, and woke up Friday morning absolutely ready to rock the ride.

I had also arranged to do a boot fitting for a good friend (the credit/blame goes to her for being the one to introduce my father and I to more “extreme” trail riding, thus setting us off on what would eventually lead to endurance) that morning up in Camp Verde…normally way outside how far I’m willing to travel, but for that long-standing of a friend, and given the fact I would already be more than halfway up there for Bumble Bee, I made an exception. So I spent a couple of hours with her and her four horses, getting everyone sized and fitted and catching up on life before I headed back down to Bumble Bee.

Every year, I cuss out the dirt portion of the road to the ranch, and habitually forget that I drive a 4WD truck until about a mile or so in, at which point I remember, “Those 4WD control buttons on your dash are there for a reason.” And then my 4WD gets its annual use.

I got myself checked in and did some socializing, and once Troy arrived, went over to meet my ride...

Posted by Endurance.Net at 8:51 AM No comments: 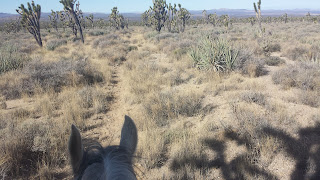 Before we left, I brought DC up and glued a set of boots on her. She has been without shoes all around since some time in January. I'd taken her hinds off with the intention of resetting them, only to find I was out of the nails for her shoes. Oops. And by the time this ride came around, I hadn't acquired more. But, at Death Valley, Dave Rabe had given me a full set of size 00 EasyBoot glue-ons. I already had a pair of 0s for her fronts. So I went ahead and did a full set of glue ons for this ride.

We had an uneventful drive to camp and found a decent place to park where I could put Hoss out on his stake. It was even still daylight when we arrived. It seems no matter how early I leave for a ride, I cannot seem to get there until the last minute. I even miss ride meetings for driving late. So it's extra nice when I can manage to arrive at a reasonable hour.

With DC having had trouble in the past with rides, I decided I'd ride Hoss the first day so she could settle in. She does fine by herself in camp, other than not eating anything other than hay, and I hoped by leaving her she would have time to recover and rehydrate from the drive.

In the morning I got Hoss saddled up and we got out on trail. It was a nice day, not cold and not hot. While it was chilly, I was able to leave my jacket at camp rather than have to deal with it during the day.

Hoss was extra happy to hit the trail and behaved pretty well. It shouldn't be surprising after 4,000+ miles. I suppose ultimately it doesn't matter how many miles a horse has done, one can never be sure what horse they've brought until they're on the trail...

Posted by Endurance.Net at 10:23 AM No comments: