Saturday in the UK - Heather Reynolds

Today we got to the barn for our morning cold trot outs and all the horses were examined. More people have arrived so the group is growing.

After trot outs we barefooted Marvel and then put he and Kutt on the walker. There was a group meeting and then we did chores like cleaning stalls etc. We are also all taking shifts now watching the barn, we had the 10-12 slot. I stayed and watched the barn while Jeremy went for a run. Holly went with a group of crew to see the crew points.

When Jeremy returned we glued on Marvel's race boots. They are the new awesome Easyboot Glue On pattern with the great break over. He seemed happy with his cool new kicks on.

We went to the cottage to have lunch and then hung out for a bit. We needed to be back to the barn by 4pm for our afternoon trot outs. As Holly and I hung out on the couch I fell asleep. We woke up and headed back to the barn around 3:15. All seven horses were trotted at 4.

The whole group of people, crew, riders and staff, for the USA contingent are really supportive, helpful and amazing this year! I have never seen a more cohesive group involved in one of these International events. I credit this largely to Emmett's leadership skills and the effort he has put into this to make everyone comfortable not only physically but mentally as well...

Read more here:
http://reynoldsracing.us/heathers_blog/view/407/saturday
Posted by Endurance.Net at 11:17 AM No comments: 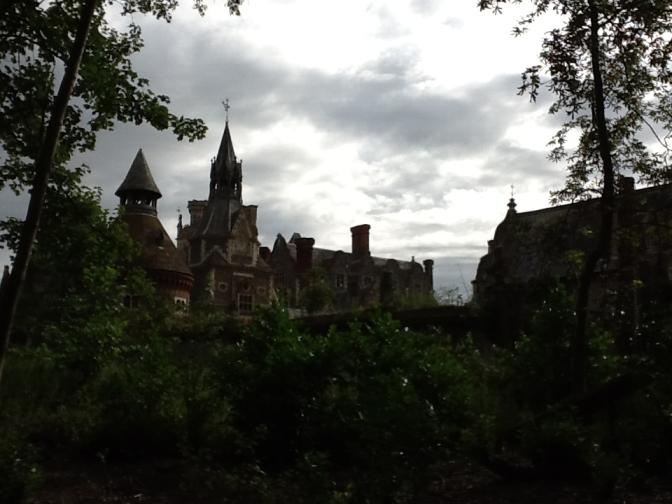 Above is a castle on loop one of the trail and we have also been riding past it in training.

Becky, Judith and I flew out of LAX on Tuesday, the 14th. It was very uneventful. Earlier in the day I got the best news, our horses had arrived at the barn in England a day sooner than scheduled. Jeremy and the horses flew to Luxemburg and instead of staying all day Tuesday and spending the night to drive on Wed, they just landed and drove.

We arrived on the 15th around noon at the Heathrow airport. My sister, Holly, landed before us so she was there waiting for us. After getting our luggage we headed for the rental car office. Judith saved me big time when she overheard that I was about to pay for the rental insurance. She asked me if my credit card company covers that for me. I had not ever checked into this or known about this feature, it turns out that I did have coverage thru my AMEX! That saved me 35 pounds a day, the current exchange is 1.558 USD to 1 pound. That would have been pricey!

Read more here:
http://reynoldsracing.us/heathers_blog/view/406/first_few_days_in_london
Posted by Endurance.Net at 11:12 AM No comments:

Tevis 2012 Ride Report: Part 1 – Getting to the start is the hard part sometimes!

I should rename this post to be: blogging on a netbook with wordpress is more annoying than anything!!! My regular laptop has to get sent in for repair so I am at the mercy of this 10″ mini-me that makes everything I do take twice as long! Ignore the goofy formatting, I’ll fix it when I get my computer back. Well, enough of that…on with the first part of my Tevis ride this year…..

Then I changed my mind yet again and decided to go do the new City of Rocks multiday ride in Idaho. My thinking was that I’d rather ride both of my horses two days with pretty good odds at getting to ride all four days versus a 50/50 chance of riding one horse one day at Tevis.

Only…..Bo did so well at City of Rocks and came through it in such great shape that I decided what the heck and got my entry sent in – a day after the deadline! Bo had been coming through every single ride all year at 100%. Entering late was okay though, as it gave me less time to worry about what might go wrong. I knew that I was ready and that Bo was ready, now I just had to get all of the final details into place starting with arranging my crew!

It’s really hard to not want to do Tevis when you have a horse ready, I just couldn’t resist. I think my biggest worry was “how much is too much?” in regards to how many rides Bo had already done this season. Our horses all go great until a point at which….they don’t! I always think of each horses’ ride season as having an imaginary line…you know the one that if you cross it, you’ve gone too far? It’s always elusive but also sometimes so very close and often invisible until you’ve gone over it. Then it’s too late. I don’t want to cross that line. It’s what keeps me riding conservatively; fear of going too far, too often, or too fast, and hurting my horse...

Well Tevis started out fun... Jeremy and I rode out to the start with smiles on our faces, the weather was already T-shirt weather and it was really beautiful under the moon. At the starting line I had happy Birthday sung to me by all of the competitors around, that was super fun. The start was easy and our horses felt great. We were riding with our friends, Lisa and Garrett Ford. At mile 2 Cleo, Jeremy's mount, was leading and got spooked by some water/mud on the trail in the dark. She jumped up a very steep bank and then was about to flip over backwards when she did a pirouette and launched back towards the trail. When she landed she fell and rolled, Jeremy came off in the mud and then she scrambled and stepped on him a few times and then disappeared off the edge of the trail. There was a lot of noise and then it was silent. Very disturbing. We yelled for Cleo and there was silence. All the while the 200+ riders were at a halt on the single track waiting to see what would happen. Jeremy ran around, ahead on the trail and found a way down to where Cleo was. He had to push through the dense bushes. When he got down there we could hear Cleo moving and I yelled to see if Jeremy needed help. Cleo was stuck on her back in the brush on the hill side. Jeremy was able to grab her head and flip her over and then walk her out. After a brief inspection, in the dark, and a trot Jeremy got on and we were on our way again.

Just after the highway crossing Garrett, who was riding behind Jeremy, spotted the blood on Cleo's leg. We had to keep going on the single track so we wouldn't block everyone. When we got to the bottom of Squaw, Jeremy got off to have a good look and it was clear that Cleo, although sound, needed medical attention. His ride was over and he walked her down the mountain to get help. It turns out there was a radio guy right at the bottom and a vet with medical supplies and a trailer, very simple. Cleo got her knee stitched up and her heel flushed and went onto Antibiotics immediately.

In which we attend the Bare Bones ride, my bum is sore and I learn stuff - Aarene Storms 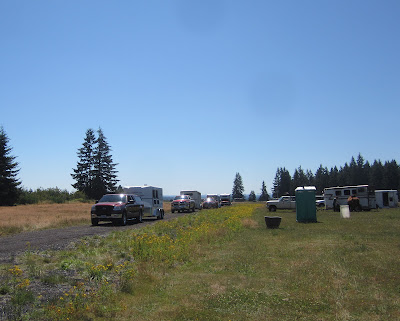 In which we attend the Bare Bones ride, my bum is sore and I learn stuff

Those of us who attended the ride last year were unconvinced. All weekend I saw people squinting up at the sky, wondering if it was going to fall on us like it did on ride day in 2011.

It didn't. At least, there wasn't any rain.

There was, instead, a lot of HEAT. Anything above 80 degrees F is hot to a Swamplander. The temperature in camp was above 90, and the humidity was high. Ugh. The afternoon before the ride, we mostly hid in the shade (and squinted at the sky).

Just before dusk, we rounded up some cover models for the Endurance 101 book! Monica has been shooting people for a couple of months, collecting images for the book, but we didn't have an image we liked for the cover...so she staged one.

I took pictures of her taking pictures. This isn't the final image for the cover, but it's a tantalizing hint. More details soon.

No rain in sight. However, instead of a Plague of Rain, we had several Plagues of Bugs...

Read more here:
http://haikufarm.blogspot.com/2012/08/in-which-we-attend-bare-bones-ride-my.html
Posted by Endurance.Net at 11:18 AM No comments:

June 15, 2012: Kenlyn Pristine, Deals Midas Moon and I headed northwest to Lake Meredith north of Amarillo for two days of riding some of my favorite trails. I had not been to Llano Estacado since... I’d have to look it up; it’s been at least two years, probably more like three years. This ride site has some history and memories for me with one particular year being “stuck” there for four days due to flooding rain that kept us all in the valley-like camp ground, unable to get out. This ride used to be held toward the end of September and in the last three years has been moved to June. And there have been many improvements made over the last decade with not only road work, but now the addition of covered picnic tables and a permanent bathroom. The trails are absolutely gorgeous. If you have ever been in the Amarillo/Dumas, Texas area, you know the terrain is, well, flat. Not at Lake Meredith though. As you enter the park, you drop down into a valley with canyon-like formations. Very pretty.

After getting a semi late start on Friday morning, we arrived in camp around 3:30 p.m. It had rained quite a bit in the days prior including Thursday night so the ground was boggy and it was humid. I set up camp rather quickly and was able to get Kenlyn Pristine vetted just prior to the ride meeting. The forecast called for near 100-degree temps but not more rain. The plan was to ride Kenlyn Pristine Saturday in the 50-miler and then Deals Midas Moon Sunday in the 50-miler. The loop order was to do 20 miles, 10 miles and then 20 miles. They put the 10-mile loop in the middle because it did not have any water available on it other than one trough about a mile out of camp and they didn’t want the last loop of 50 miles to be “dry” in the heat of the day.

June 16th; 6:00 a.m.: There were 26 starters in the 50 with 24 finishers. Kenlyn Pristine and I started out toward the front with four other riders. It was a bit of a yo-yo for me as we would move out on the flat and then drop back to slow down on the hills, only to catch back up with the other four on the flat… she didn’t care much for the “easy girl” on the hills part, but she listened fairly well, or at least my hands weren’t too blistered! All five of us came in off the first 20 miles about the same time in approximately two and a half hours. I was a bit trepid about the pulse criteria of 60 beats/minute with the temps, but I was pleasantly surprised that she pulsed down quickly...

Posted by Endurance.Net at 8:55 AM No comments: