I can’t think of a better way to wrap up a ride season than how this ride ultimately went. A few weeks ahead, I had waffled back and forth on if I should go for the 75-miler or 100-miler. The impatient part of my brain really wanted to try the 100-miler, but the reasons for doing so were not plentiful, and there were far more reasons to curb my enthusiasm and do the 75-miler. The overriding reason being that Liberty has never done anything longer than a 1-day 50, and we haven’t done any back-to-back rides, and ultimately, my gut was telling me that doubling her distance in one go would be too much. Or if we pulled it off, it might not be pretty…and what I’ve learned with this horse is every time I’ve tried to bite off too much or gotten too ahead of myself, it’s turned around and bitten us.

To that end, I entered the 75, and as the ride approached, I found myself getting really excited about it. Hard to know specifically why, but I felt probably the most excitement for this ride than I have any other ride this season. Probably the biggest question mark and misgiving I had (aside from the general “I hope we don’t find a rock with our name on it, nothing goes wrong, etc” pre-ride worries, since I’ve learned to never ever take it for granted that I’m going to finish a ride) was how the night portion would go.

A couple weeks prior, we had done a mini-clinic on night riding…and she was rather awful once it got dark. Very amped up and jigging (riding our “home” trails and leading a group of riders who were new to riding in the dark, and she thought we could be going a lot faster than the pace we had set), flinging her head around at bit pressure, and legitimately terrified of the glow lights I had put out. Like, stop and stare at the green glowing lights, snort, try to whirl or bolt past them, trembling, shying…it was a side of her I had never seen displayed before. And I kind of ran out of time to do any further practice with the notion. So I was hoping that having significant mileage under her girth on ride day (I anticipated probably being able to make it at least 60 miles or so before I lost the light) would settle her, or at least make her reactions not so dramatic...

As my brother pointed out, being too busy to ride worked out great. Jazz was second place and best condition at his first 50 this weekend. Unlike his first LD, 30 miles at the Bill Thornburgh ride two weeks prior (read about it here: Jazz’s first LD), this ride tired him out. Hopefully he will now have a more realistic understanding of his job!

As I had at the Bill Thornburgh ride, I took both Fantazia and Jazz. This is a mixed bag for Jazz. On the one hand, he is no doubt happier at the trailer with company, and it’s nice to pony him for a bit. On the other, he hates being separated, and makes a fuss during vetting and while we ride alone. For Fantazia, it’s torture. She hates being left at the trailer. She expects to do endurance, so she’s anxious, and then she doesn’t. Of course, she would also be unhappy at home without Jazz. And she’d drive my mother crazy whinneying.

I take both in part because I don’t want my parents to stress. But I also do it because I want to be able to ride both of them as soon as Fantazia is fit enough. I want her to learn that going to a ride doesn’t mean competing. I want them both to learn to wait patiently at the trailer. Also, this lets me condition Fantazia away from home...

Read more here:
https://jessicaeblack.org/second-place-and-best-condition-jazzs-first-50/
Posted by Endurance.Net at 8:50 AM No comments:

One Heck of a Halloween Hillbillie - Merri Melde 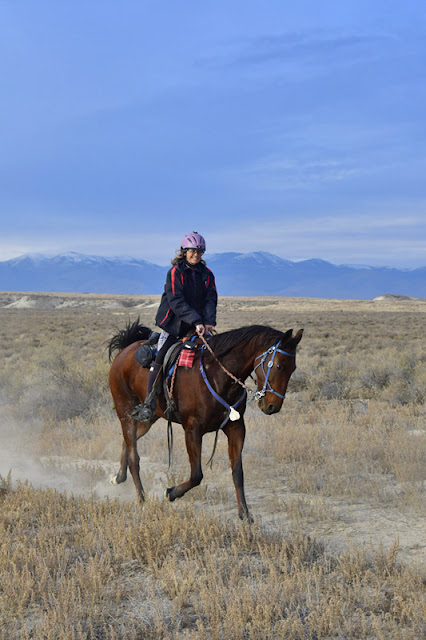 I lean forward, as still as possible in the saddle, talking to my horse as he flies along, telling him what a Good Boy he is, how strong and powerful and phenomenal he is, how lucky I am to have him, how lucky I am that he willingly and happily carries me so swiftly over these trails. One of his ears flicks back to listen to me, then flicks back forward as he rockets forward, devouring the trail, focused on his mission of flying through the desert.

I wasn’t sure what Hillbillie Willie and I were going to do at the 3-day Owyhee Halloween ride, the last one of the season. A 50 and some LDs (25 milers)? All LDs? At this ride last year, after Willie finished his 50, he gas colicked and was on IVs till midnight. It scared the bejeezus out of me and I have been forever since paranoid. Over his 5-year endurance career, he’s completed 26 50-mile rides for 1065 miles and never had a metabolic problem until last Halloween, but now I always ride him with a heart monitor and watch him like a hawk from the start to the end of the rides. And always worry...

Read more here:
https://theequestrianvagabond.blogspot.com/2022/11/one-heck-of-halloween-hillbillie.html
Posted by Endurance.Net at 9:07 AM No comments: