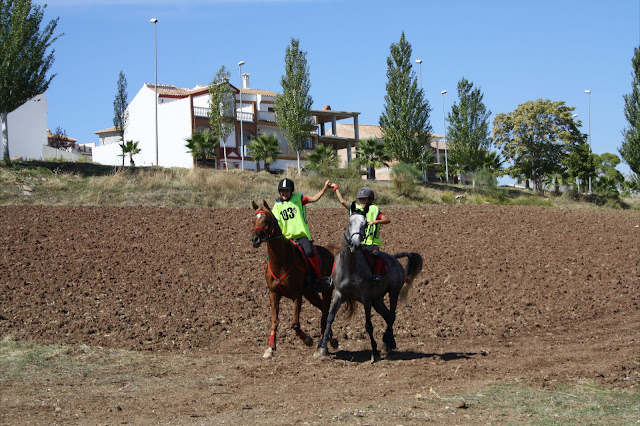 This is the chronicle of a child for nine years, which has started in this world of Raid, youth is increasingly early age and with so little, and expresses perfectly and begins to know and love the horses and Riding like this mode, which is causing so much furor among the young. Nothing but must attend an initiation test and we can see the amount of chavalería together with their horses participate in the first test of this specialty Riding, as is the Equestrian Endurance, with its routes campers both pleasing to the fans.

This is the chronicle of Alvaro Galisteo their first Raid:

My first raid started on a Saturday in October where we were riding to prepare our horses were Vint corresponding with Celia, Bold with Miguel, Anais with Forev ... er, David with Gorki, Iris with her ​​mare Eritrea and Luis with Pacharán .
prepare When we gave gifts to Michael, and it was his birthday. At nine we left to dispute the raid Coin. That raid was very important to me, because it was my first raid and had been punished enough time.

Upon arrival, we got down to business. Horses started pulling the truck to pass the first veterinary control. Flora was the horse with the way I ran it with no problem, only the vet told us he was a little nervous about the shuttle but that did not matter, it was very normal to happen.

At twelve I started to warm up with Flora and the 0:15 and we are very happy with the illusion of leading a prize. The place was amazing, like views, with many breathtaking landscapes. We were very quiet, to our pace and unhurried. When we do not care because they were skipped fewer miles than expected. After we assisted a man named Hugo, came with us to the finish.

Upon arrival at the goal dismantle the horses and got to refresh them to go down the beats. Flora not only get tired so soon recovered. After 15 minutes we went to veterinary control and Flora what happened, although no proof of trot trot and Celia wanted my partner helped me. After we spent all veterinary checks went to eat...

Posted by Endurance.Net at 9:50 AM No comments: