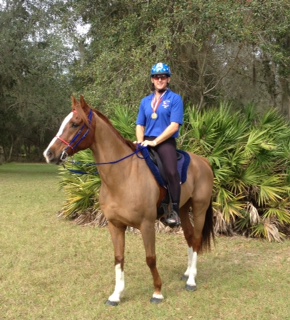 Jeremy and I have been busy riding, riding and more riding getting preparred for the NAETC 2013. The race would be only 15 mins from our farm in Florida, in the Goethe Forest with camp at the Black Prong Equestrian Center.

Dust was having some big hoof issues. He is of French Arabian bloodlines and his feet leave a bit to be desired. Lucky for us Easyboot has just come out with the Easyshoe. We glued a pair of those onto Dust's front feet leaving his hinds barefoot and we were in business. Without those on his feet he would not have made it to the starting line this year. For the 5 weeks leading up to the championship Dust trained aggressively in his Easyshoes. Life was good. The best part was when we took them off it was clear that his feet were able to greatly improve while doing heavy training, that's a first!!

Jeremy and I had taken in 3 horses for training the month leading up to the race, two of which would do the championship. It was not our intenet but we now own one of those horses. We liked him so well we just went for it. We now own Kowboy CS, we bought him from Canadian rider Yvette Vinton...

Read more here:
http://reynoldsracing.us/heathers_blog/view/443/north_american_endurance_team_challenge
Posted by Endurance.Net at 9:35 AM No comments:

Ride Round England: 8 December, Back Home in His Stable

Sunday 8 December. We had finished but still had to get home. He was standing by the gate of the field with an alert and lets get on with it look about him. I thought he does know this is a home run. So, after breakfast, we tacked up again and set off up the drive to reach the bridleway. On the steep bit of the hill he chose to trot. It is easier than a plod at a walk and he wanted to get on. That was fine but when we turned to go down the steeper grass slope I did wonder how we were going to do 16 miles with this level of impatience. He calmed down and we went back along Broadway High Street without any fuss, though the marquees and tents on the green were all billowing which did attract careful watching and need an extra yard of road width going past. We trotted up to Snowshill and then walked on...

Read more here:
http://rideroundengland.wordpress.com/2013/12/11/ended-but-still-need-to-get-home/
Posted by Endurance.Net at 9:37 AM No comments: