My horse and I have just gone our furthest distance yet. I’ve been in the saddle for hours. My knees and back ache. The sun is beating down; temperatures are climbing, causing us to slow to a walk. It feels like it will never end. The enthusiasm I felt at the start is waning but I don’t want to give up, so I just keep riding, taking it mile by mile.

The sport of Endurance Riding has always intrigued me. The athleticism of horse and rider teams competing on courses of 100 miles in a day is awe inspiring. I’ve always wanted to make it to that level but so far have only competed in limited distance rides, meaning shorter than fifty miles. Recently, I decided to attempt a longer distance. Here’s the story of how we reached our goal of completing a fifty mile endurance ride.

I started competing on River, Byron’s horse, this season out of necessity since Mackenzie is still healing from an injury. In March, River and I completed our first 25 miles at Old Pueblo in Sonoita, Arizona. The terrain consisted of gently rolling hills and River handled it beautifully. We were able to buddy up with fellow Greenbean, Christina McCarty and her horse, Hot Shot. Riding with them was a real pleasure. It gave me the confidence to ride away from camp on a prancing, head-tossing beast who was screaming for her friend back at the trailer...

Posted by Endurance.Net at 11:16 AM No comments:

As published in The TrailHead News Dec 2018 issue

Over the summer I had the opportunity to camp and ride throughout central Oregon for two weeks, stopping at 4 different equine camps along the way and riding some phenomenal country.

Celeste and I started at the Quinn Meadow Horse Camp, west of Bend. It’s a popular destination point for riders throughout the Pacific Northwest. This very clean, very welcoming camp offers sturdy corrals, potable water, private camp spots and miles of loop trails to enjoy through dense forest, and remnants of the area’s volcanic past.

Within 10 minutes of the horse camp riders can step back over 7,000 years to a time of bubbling basaltic lava flows and volcanic vistas. Riding through the lava flows that tower overhead is quite the experience! For more info on the horse camp including accurate directions, GPS tracks, pics, and more, visit https://www.trailmeister.com/trails/quinn-meadow-horse-camp/

After a few days at Quinn we decamped and traveled an impressive 5 miles down the road to the Todd Creek Horse Camp where I would be completing my unfinished ride of 2017. Pulling into the immense parking lot that is the Todd Creek Camp we saw that two of our Quinn Meadow mule neighbors had already arrived, made camp and were now planning the next day’s ride...

Posted by Endurance.Net at 7:45 AM No comments:

I rode Sorsha on her second 50 of the year on Day 2 of the now 4 day wild west ride at Skillman campground near Nevada City in the Sierra Nevada mountains. Gretchen Montgomery joined me for the ride on her mare Coquette. I have done thirty plus 50 mile rides at this event over the years so I know the area pretty well. The ride this day was a modified version of the usual route with some differences. The day has been a little short in the past, but not on Friday. It was easily a full 50 on a long day in the saddle in a weird ride. It was very hot, which does not bother me, but the heat and trail took it out of many people. An amazing half of the riders got pulled on this day which I don’t ever remember happening. The ride used to be about 60% single track and 40% roads, but not now! Ride management did me a favor and made it about 90% single track. It was a great trail for me anyway. Long story short Gretchen and I just rode all day and had pretty much a perfect ride. We missed several turns, as did many people, but were able to back track and find the route pretty easily. The ride started at 7am and we finished at 6pm in 19th and 20th. I believe about 48 started and only 26 finished. My knee did well again as it did at Cache Creek 4 weeks ago. My solution is to walk a quarter mile every 5 miles or so- it really helps refresh my knee.

Oh, about my horse. When I got Sorsha 3 years ago I told people I think this is going to be a good endurance horse. Oh boy was I right on that one! She is no longer going to be a good horse, she is now officially a very good endurance horse! I’m astounded how far she has come so quickly. She is a metabolic machine with incredible recoveries, which is a good thing. In her first few rides I had to lead her on foot from camp due to her nerves and excitement- not any more. We walk out perfectly looking like a trail horse. She would not go near water, mud, or moist ground. (On my test ride before I bought her we had to turn around because of a little mud on the trail) Now she crosses anything. She used to have a fit and spin around when another horse passed her or she passed one- not any more. She goes up hills like no Arabian I have ever ridden. She eats and drinks like a seasoned pro. Her number one issue is she is flighty and spooks. She was VERY spooky at first which led me to have to ride her differently that Donnie, that’s for sure. I know she is going to launch so I have to be ready at all times.

Here’s where I admit that you never stop learning about horses. Before the Cache Creek ride a month ago I was talking to my friend Ines Hoffman who I rode with. I was explaining how I had to ride Sorsha differently than Donnie because of her spooks. She gave me some simple advice that at first I did not pay much attention to. She just told me “Don’t ride her like she’s going to spook, ride her like she won’t.” I started thinking about that, and during the ride she pointed out that I was looking for things for her to spook at, which the horse probably felt. I stopped doing that and just relaxed, like I do when I’m on Donnie.

Yeah- night and day difference. She did not spook at anything during the Cache Creek ride, even when she was in the lead of our group of horses. Not one spook. At the ride on Friday Gretchen and I spent just about half and half leading the other. Sorsha did not spook once. She looks at things, and will move over on the trail a little bit when she’s looking, but no spooks other than one little startle when she walked over a deep rut filled with branches. She’s a different horse in the last couple of months, and is an absolute joy to ride. I was obviously communicating nervousness to her. It is so neat to see the incredible improvement in just a couple of years.

Next stop is Fireworks where I will ride with Judy and Donnie on the 25. My year is focused on getting Sorsha primed for the Championship 100 at the 20 mule team on November 2nd. It’s my trail and I can’t wait!

Posted by Endurance.Net at 7:41 AM No comments:

Across Argentina on Horseback 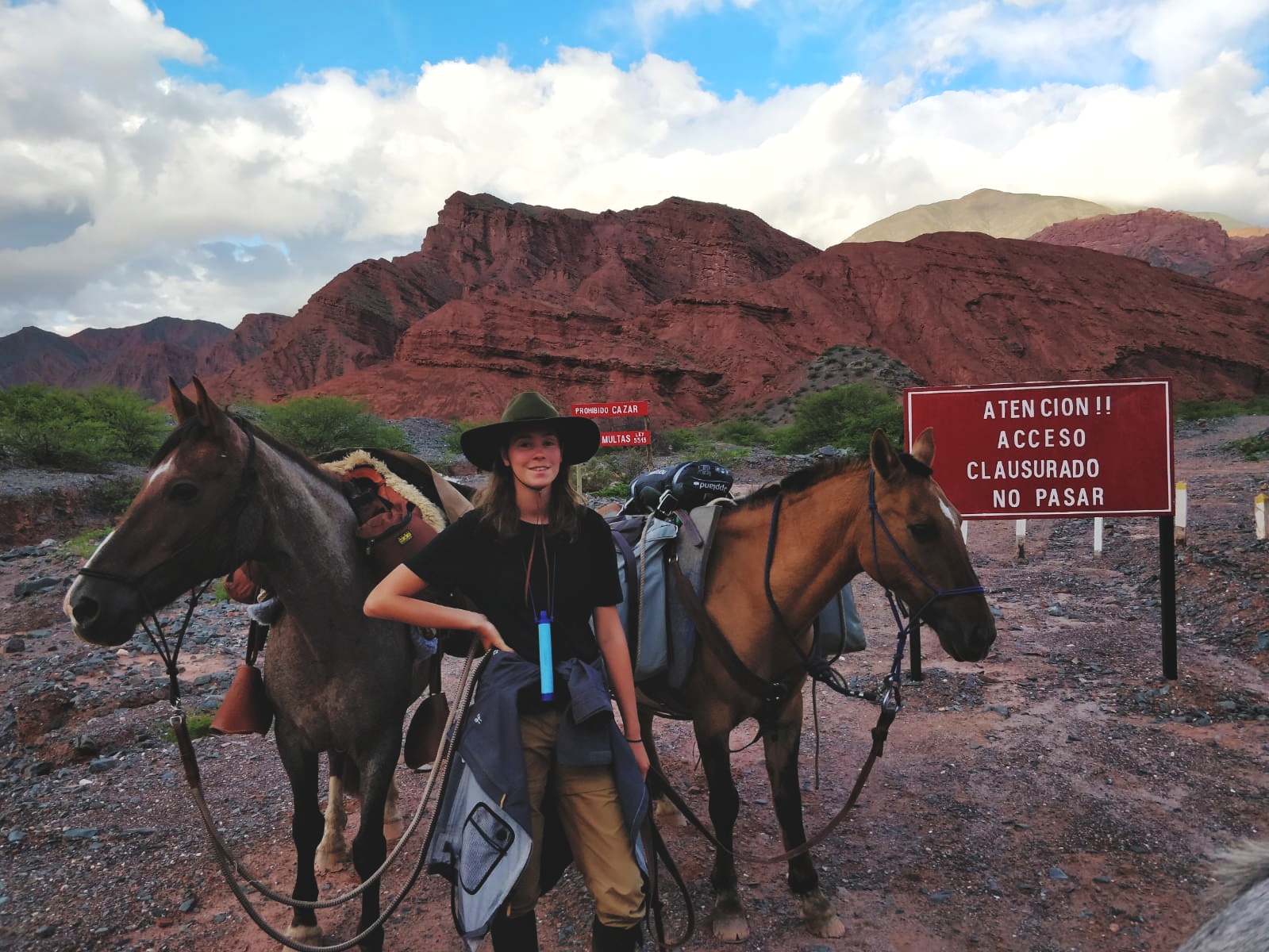 Harold and Danaé were novice riders until they embarked on a 1,000km trek across Argentina with three incredible horses...

El Carmen, Argentina - April 2019: The young couple on horseback are tired after another long day on the road. They are 600km into their epic trip across the wild terrain of northern Argentina, and there’s hundreds of kilometres still to go with their trio of horses.

On the horizon a vehicle is coming their way. Dust spits up from the road as the engine roars. The car nears – faster and faster, louder and louder - and Pilpinto, their sturdy and reliable saddlebag horse, takes fright, leaping over a barrier by the roadside and then back over it again. He screams in pain.


The young couple, Harold and Danaé, come to his aid. Poor, brave Pilpinto is spooked. He’s bleeding from his leg. The blood rushes. He needs help...

Posted by Endurance.Net at 8:01 AM No comments:

Kenny and I jumped aboard adventure pal W’s trailer last Friday morning for a journey to the new high desert multi-day endurance ride Torre Creek in north eastern Nevada. Kenny and I’s last endurance ride (complete with exciting travel issues) was in September and we had had truly minimal saddle time since the new year between life and the new job; that coupled with ride camp at 6500 ft elevation (we live at about 1200 ft) with climbs promised had me already weighing the idea of changing my planned 50 to an LD once or twice in the week leading up to the event.

Morning of departure, the weather forecast was dire and we had a long (7 hr) drive ahead of us, but a friend of W’s was putting the ride on and we had long ago committed to attending. Feeling as discombobulated as one does after not going to a ride in ages, and then not in your own rig, I scrabbled together what I thought we would need for an “arrive-Friday, ride-Saturday, home-Sunday” weekend and off we set (note to self: always pack more hay than you think you should).

An aside: If you have followed this blog at all then you may know that trucks have a tendency to misbehave around me. Here I would like to record a BIG shout out to W’s 1997 Ford, who laid to rest all past transgressions by charging through the 14+ hours of travel like a fresh faced youth, apparently unphased by being backed into at ride camp mid weekend. Thank you, Ford!

Suffice to say that we arrived at ride camp as planned late afternoon on Friday–and that’s about where “as planned” ended for the weekend! Things got real quite quickly, as Kenny has barely made his opening tour of the grounds and taken in his ride camp spot before it started hailing– with conviction...

Posted by Endurance.Net at 7:42 AM No comments: