In the Wake of our First LD: Scattered Observations

For several years now, I've been reading everything I could find about endurance riding. Web pages, forums, books, blogs, articles -- you name it, I've read it. This background served me well at the Owyhee Fandango last Sunday. I understood more of the procedures and equipment than I would have without this research, and I knew the answers to many questions I overhead from other riders -- though, as a newbie myself, I kept my mouth shut!

Overall, I felt well prepared...and yet, there's still plenty to learn, things that can be gathered only through experience at actual rides. Below are miscellaneous observations from the Fandango:

Many times over the weekend, people asked what distance Aaruba and I were there to ride. The answer that jumped repeatedly to my lips was, "Oh, just the 25." After all, compared to 50's or longer on each of three days, or the 75 or 100 mile races, 25 miles seems paltry indeed! However, several times I was told to "Never say 'just' 25." One person went on to note that most horsepeople will never ride a horse that far in their lives.

Another rider expressed approval for the concept of LD's as training rides in preparation for longer distances, but said he felt there should be no top-ten rankings given. I got the feeling that he didn't appreciate those riders who choose to stick with the shorter rides and turn them into races rather than moving up to real endurance distances of 50 miles or more. Also, he noted that the lure of top-tenning often results in less training and more racing taking place on the LD trail. I see his point -- and even agree, to some extent -- but I must admit that the memory of this conversation made me a bit uncomfortable with my 5th place finish the next day. I wanted to shout to the crowd at the awards dinner, "I swear I just rode my training pace! I wasn't trying to top-ten!"

The Oreana rides are extremely well managed and organized. Travis and I had no difficulty finding and following instructions...after the first ten minutes, that is. Upon arrival in camp, we experienced some frustration and even mild embarassment as a result of not knowing our way around. To those who kindly pointed us toward parking areas -- thank you. To those who shot us annoyed glances when we paused to study the layout -- hey, maybe it's been a while, but you were new once, too.

Being the shy type that never wants to intrude upon others, Travis and I hung back a bit during the ride meeting. The people who did speak to us were friendly, but their conversations naturally drifted back into the circles of people they already knew. I don't blame them -- it's human nature to tend toward the familiar. Being an outsider for a while is a natural part of integrating into a new community. Still, I hope I always remember how much I appreciated those who made a real effort to include us (Monika Steller and Melanie Shirilla in particular), so I can "pay it forward" someday.

Another thing I noticed about ride camp was that while almost everyone is friendly and interested in one another's horses, the atmosphere is decidedly non-judgemental. I didn't see anyone giving unsolicited advice or scoffing at another rider's choice of feed or tack. On the whole, it seemed that people with two-horse bumper pulls and tents were as welcome as those with air-conditioned, 6-horse vans with living quarters and custom details.

Were there cliques and unfriendly sorts? Sure, a few. When Aaruba and I caught up with a group of riders on Sunday and stayed with them for a mile or two, I got the distinct feeling that, despite my attempts at casual conversation, they were just waiting for me to go away. Oh, well. No group is perfect -- and overall, the endurance crowd seems closer than most.

3) The Importance of Crew

Okay, so it was just 25 miles. (Sorry. I mean, it was 25 miles!) Aaruba and I may have participated in the shortest race of the day, with just one vet check and hold, but I still learned how wonderful it is to have a good crew. Our hold would have been much more stressful without Travis there to hand me the stethoscope, hold Aaruba, fetch a sponge, carry hay, keep track of my rider card, watch the clock, run to the trailer for vetwrap, replace a hoofboot, take pictures, offer moral support, and clean up our mess once we were back on the trail. Besides, don't he and Wyrsa make the cutest crew you ever saw?

The bad news is that Travis has the bug, so as soon as we get a good horse-and-saddle combo ready for him, we'll either be training new crew or riding cavalry. Ah well, you know me. I'm always up for a challenge. 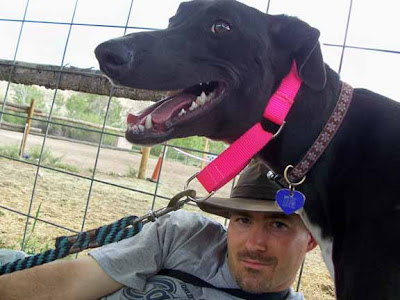 Glad you enjoyed your first race. I have been doing it for 4 years now and only love it more. People can be very cliches in this sport--it takes awhile for them to accept new people, but it does happen. Just smile alot. Happy trails

I'm preparing for my 4th LD this weekend in Gilroy, CA. I enjoyed your story. I have found that as "horse people" go, endurance riders are some of the nicest horse people I've ever met. I have made friends at each new ride. People seem to be very helpful with newbies and just helpful in general. The Ride Managers and their teams in the PS region have been absolutely the best ever. I'm thrilled to be a part of it. :)
carrie

congrats... i just did my first LD too.. Yup "just an LD" Onward and upward

happy trails no matter the distance
GP and Gazi