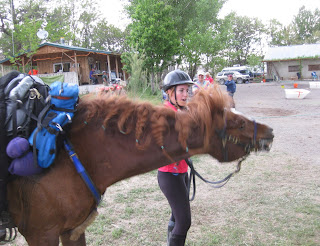 MONK's ride is scheduled for Sunday the 25th of May. It is in Idaho which is about a 10 hour drive from our Ranch in Penn Valley, CA. MONK got a early 3 mile Pony and then locked in his stall for breakfast while we finished loading the trailer. MONK loaded easy and we were off. We plugged the Idaho ranch location into our GPS and it said that we would arrive at about 7:30PM. We had almost a full tank of diesel. Sign said that it was 74 miles to Winamucca, Dodge computer said that we had about 78 miles worth of fuel left, so we decided to fuel in Winamucca.. Well as the we got a little closer the signs read like 35 miles to winamucca, Dodge computer said 2 miles left. Nothing in either direction for miles and miles... As the computer DTE got to 0 a big sign was visible in the distance. Fuel at Puckerbush....now there is a name.. We pulled into the big truck bays and Nancy took cash into the store... 10 minutes later she came back out, she said that she had to get her drivers license for them to hold until I was done fueling... never heard of such a thing. Anyway, when you are on 0 or minus 0 can't complain too much. I told Nancy that it was a good omen, that MONK was going to do good. With a full tank we headed out. As we got into Winamucca there were lots of signs "Welcome Bikers", and bikers there were.... Funny how they all seem to look the same, my wife says I should no go into why I think they look all the same.. They were coming from the north, from the south, traveling in groups as large as 50, and all of them with no mufflers.