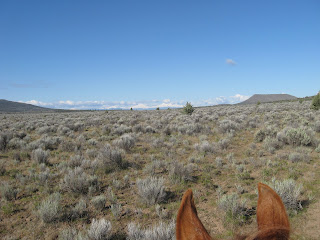 photo: Snowy Cascades to the West

Getting away to go to the Prineville Endurance ride was my Mother's Day present to me. I hadn't been to the ride in years and there were so many people that I wanted to visit with. What fun to catch up, it was like a reunion! This was the first time Thunder and I had ventured off to Oregon for a ride. And it was to be his first 75 miler.

My plan was the usual, start late, keep him by himself and out of trouble. Which wasn't too hard since most everyone took off fast and then I got on and we headed out of camp. He was a bit wound up but I thought the climb up Grey Butte would settle him down. Wrong! I was keeping him in a trot, but he was a boing machine with a pogo stick trot. On the narrow trails he was pretty good but whenever he got out in the open he was pretty spooky. Only came close to dumping me once and I hooked a heel in his side and hung on. :-) Whew! I really like those trails the Ridge Riders have built over the years! And the views of the Cascades are phenomenal!
My biggest concern was that he was so intent on wanting to catch horses ahead that he didn't want to stop and drink. I'd get him to stand at the water but he'd just stare on up the trail - watching. He breezed up Kings Gap and on into the vet check at Cyrus Horse Camp. He still didn't drink and he was pushing me everywhere. Despite his antics his pulse dropped well and he vetted with A's and we went back out the trail. A couple 50 milers caught up to us and now he really wanted to go. I got off and led him for about a mile and he calmed down. I got back on and he hit a nice trot. It is just easier to settle him down that way than fight with him.