THE MANY FACES OF SUNRIVER 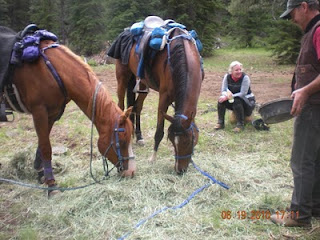 photo by Tami Rougeau
I have been lucky enough this year to be able to venture to Central Oregon for two rides. This has given me the opportunity to visit with old friends that I haven't seen for a long long time! What a treat! But all day as I traveled the 100 miles of SunRiver, people kept asking, "Karen, how many times have you ridden SunRiver?" A lot! That was my only answer but once home I did the research.

One year that I didn't have to look up was 1977, my first SunRiver. It was also my very first 100 mile ride on my big horse, Sunny Spots. Nancy Cox and I rode together, it was also her first 100 on Rakar. I broke a stirrup and rode into camp at the 50 mile point, packing my stirrup in my right hand. Not to be deterred I borrowed a saddle for the next 50 miles. This first year the ride camp was in a meadow on the banks of the Deschutes River near the town of SunRiver. It was beautiful!! The 50 mile loop was uphill for the first half and down for the last half. 10 started and 5 finished. We were out until pretty late, leading our hroses down a hill in the dark, and we saw headlights. This startled us a bit and we were trying to figure out who it could be. Turned out to be ride management out looking for us. Gene Petersen took one look at us leading our horses and said, "Time to ride girls!" He picked me up and put me on my horse and then followed us in the pickup - hey now we had lights. We were tired and sore but the horses were fine.

And that my friends was the first of many more 100 mile rides. I rode Sunny on five different Sun River 100's. One of those just a couple months after Andi was born. I rode the 100 four times on Moka's Pat-A-Dott.

One year I borrowed a horse, Reno, from Jennifer Horsman, so I could ride the 100. Zap did the 100 at SunRiver/Chuckwagon twice. Yet another year I took a new horse, Jafar, on his first 50 there. It is always a great first ride of some sort.
This year it was Thunder's second 100, only three weeks after River Run. A bit closer in timing than I like but I was able to go at that time and reasoned were weren't going fast so we would be fine. It stormed and rumbled and poured and flashed Friday as we stood huddled under a small shelter for our ride meeting and dinner. We all hoped this wasn't a preview of Saturday.

I met Tami Rougeau from Nevada, a fellow Easyboot Glove user, and we talked and decided to ride together.
We left a few minutes late and they never saw the other horses leave camp. May & Thunder walked calmly out of camp and were well behaved all day! It was wonderful. It was a cool 42 degrees! We'd had 85 at home just a few days earlier and these temperature extremes are hard on the horses and riders. I layered clothes and used a rump rug on Thunder for the first time. During the day we encountered some rain, sleet, sun and fog. It felt more like April than mid-June. But the trail had no dust and it really was good weather as long as we kept moving. We'd get chilled waiting in the vet checks. The biggest thing was the horses were starving. They tried to graze on the mountain nibbles of grass but it was sparse at best. Thunder never stopped eating in the vet checks, they just needed more time to eat. We picked up another new friend, Nancy Cardosa, around 55 miles and the three horses traveled well together. Thunder and his two mares, May and Elektrika, were all troopers and we just kept plugging away to the finish. Our CRI's were great at 40/40 and Dr Bensen said Thunder looked great at the finish. So we placed 11, 12 & 13 out of 17 starters. Not that it really matters to me. I just wanted to finish on a healthy horse!

So back to the original question of how many times did I ride it? A total of 14 times, 12 of those rides were on the 100 miler. I rode it when the ride moved camp out by the Rainbow Bridge, then up to Kiowa Springs when it was also renamed ChuckWagon Express. Then later camp moved to it's present site at Wanoga Sno Park and was eventually renamed SunRiver Classic. And a classic ride is what it remains today. Thanks to all who work so hard to keep this great ride going. The management is as classy as the ride!!!
Posted by Endurance.Net at 5:05 PM