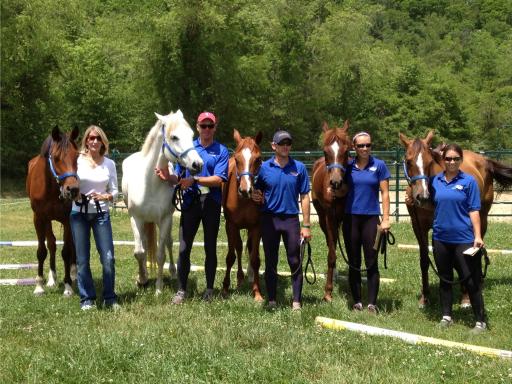 This blog should have gone out several days ago but I am just now starting to feel human again as far as sleep deprivation goes! On Wed May 2 we loaded up our 7 horses plus our friend Bob's horse to head to the Biltmore. The eight horses got on the trailer around 8:30 pm. Our plan was to drive thru the night to avoid the heat and humidity.

The reason we had so many horses was because we would be continuing from the Biltmore to our summer training that would take place in Durango CO. Ever tried packing for 5 horses and riders to do an FEI race and then also packing for the entire summer training with a trip abroad with potentially two horses flying??? A little bit of work.

The drive was uneventful. Rachel Shackelford had flown out to FL to help us drive to NC for the Biltmore. She was also going to help us with the crazy drive from NC to CO! What a hero!! I love her!!

We arrived Thursday with the two trailers, 3 dogs, 3 people and 8 horses around 10 am. We were in Zombie mode for sure! When we arrived several friends jumped in to help us get water and feed for the horses. This is when Bob's horse went with Bob. We then headed to town to go to breakfast. Melody and Chad went with and we had a great time. After this we went back to camp to get things organized. Jeremy booted a few horses while Rachel and I tried to stay awake.

For dinner we went to a BB-Q at our friends Lynn and Mark Ashby's camp. Very nice and fun catching up. Lynn and Mark are who we got A Kutt Above, Merlin (the chihuahua), Cleopatrah and An Honest Crook from. It was super fun because Merlin's mom, brother and niece were there! The Chihuahua's had a blast. We were party poopers and headed to bed super early, go figure!!.

Friday, Garrett Ford came to camp, he had landed at some unreal time in the wee hours of the am, I think Friday at 3:30 am or something! Jeremy and he went for a run. Rachel and I went to the Biltmore hotel and had breakfast with Elaine and Guy Lemeiux. These are our friends that we bought our newest horse, Honor, from. I think we had a lot more fun than the boys! Barbara also arrived later in the afternoon on Friday.

The rest of Friday was spent getting things set up, vetting, then pre riding, followed by the ride meeting. Then another early bedtime.

Saturday Jeremy and Stirgess started their ride at 6 am, Rachel and I were 30 mins later, followed by Garrett and Barbara another 30 mins later. The start of the race went very well for Rachel and I, both horses were traveling well and were relaxed. Our goal was to get Riverwatch aka Marvel his final qualification for the London World Championship and get Cleo through her first 2*...

Posted by Endurance.Net at 8:34 AM