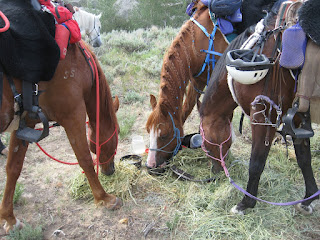 The first days ride was "Indian Grove", a trail that took us up to 7400 feet elevation. We traveled through places like Granite Pass over the California Trail and along many rock formations including Twin Sisters. However the darker spire is much older granite than the other so they are really more like mother and daughter.

We followed several roads taking us along the base of Camp Rock and Register Rock before reaching the lovely dirt trails amid the abundant rock structures. The area reminded me of Colorado's Garden of The God's. I was riding with Layne Simmons, who was aboard Thunder's son, Beautys Harley. We had been in the vet check for about 20 minutes when my friend riding Thunder's dam, Rushcreek Hollie, arrived. They were participating in the 25 and we now had three generations of endurance horses on one trail. I don't think that happens very often and I am not sure that I have ever seen it!

After the vet check we had a lot of mountainous trails. They weren't really steep as it the trail weaved around via switchbacks worn into the dirt and granite.

The scenery was awesome and many of the rocks looked like pyramids or anything you might want them to be...