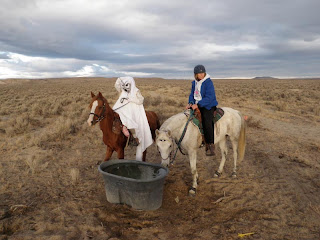 The last ride of our NW season was just before Halloween at the Teeter's in Oreana. We had a rather small group but it was a blast. It felt very much like a family get together as you got to ride, hangout and feast with your best horsey buddies!

The first day it was oh so cold!!!! 20 degrees and oh yes put yet another layer of clothes on! I hate cold but its always warmer once you are on the horse. Thunder didn't seem to mind at all. As usual I forgot the darn splint boots so had to go back and put them on and then we really had a late start. At least the big T behaves himself that way! It did warm right up once we were trotting along and I had a great time riding with Carol Brand. We did the 55 in 6:45 and placed 8th. That made us right in the middle which is pretty much what we do. Yeah more points and miles for Thunder Wunder pony! Thunder has had an awesome year of 905 miles!! So what to do for day 2. Thunder looked great and it is so hard to leave him in camp. But I started the ride season on Blue so it seemed like I should do the last one of the year with him also. Blue needed one more ride for his lifetime AERC 1000 miles. He spends all his time on the backburner, in Thunder's shadow, and seldom gets his own shining moment. So I decided to take Blue, and sponsor a Junior Tori Church. Now this was costume day and Tori shows up in the flowing flapping ghoulish outfit. My horse is big eyed and definitely disapproving and I am thinking this is not going to work...