How to avoid getting lost: from the rider's perspective - Endurance Granny 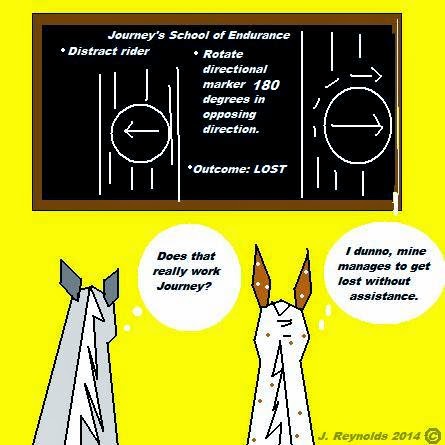 Boy oh boy...do I wish I had all the answers to that one! Other than something happening to my horse my #1 fear at a ride especially at a longer ride (50 mile) is getting lost. Talk about the ruination of an otherwise great day! There have been two instances where I got lost and it cost me my ride. After spending months of preparation for both of those rides on different horses it was a terrible let down.

The first time I got lost I had decided to start with the pack to try and position my horse nearer the front of the pack to try and get an alone bubble to ride in "somewhere in the middle" as the ride progressed. This was on Phebes, and we had managed to finish 7th on our previous ride with good vet scores, so I figured if I could position myself in the middle we'd have some sort of a shot at 10th-? depending on how the day went. Well----it didn't go too well. Putting her near the front at the start got her all worked up, and me focusing on control, and soon finding ourselves IN FRONT within a quarter mile of starting and me still trying to get some kind of reasonable control of her rate...so at a canter we blew right past the blue ribbon (at first light of the morning I can't seem to see blue) and we were off...following ribbons, blue ribbons, in THE WRONG DIRECTION. At this point in our education I was not aware the ribbons should always be on my right (except at a turn) and I wasn't the only one...another rider was hot on my heels and we trucked right on seven miles THE WRONG DIRECTION until we met up with the pack head on coming THE RIGHT DIRECTION. That was embarrassing, humiliating, and a big old learning lesson right there. Phebes by that point had herself so worked up that I was worried she'd have a metabolic issue, so I rode back to camp and took a rider option as I could not see her finishing the ride with a do over as torqued up and sweated out as she was. It was kind of a hard lesson, but I learned it. Phebes wasn't ready for middle pack, especially not be starting in the front group. Race brain took over and the day ended badly with getting lost, which was probably in our favor...chasing the front all day would have been bad.

Now how could I have avoided all that? I could have let all the front runners leave, wait for some of the mid-pack riders to leave, looked at my watch and let about four minutes pass and walk on out to the trail and start. Things would not have been so excitable and my chances of missing the first turn would have been low. I'd still most likely have finished back of the pack, but I WOULD HAVE FINISHED...

Unknown said...
This comment has been removed by the author.
9:41 PM