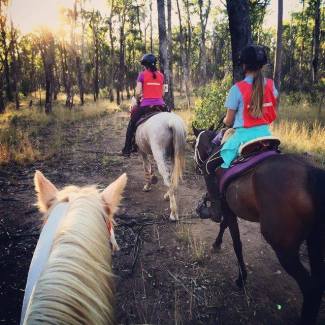 I remember a loud cracking sound, and I remember the feeling of my foot bending in a way it shouldn’t be expected to. I remember realising what was happening as I fell into the newly dug and uncovered fence post hole. The front half of my foot had almost made it over, another inch and I might not have even known the danger.

Earlier in the 2015 I had offered a young girl the opportunity to try endurance, riding my then 5 year old Arab Connemara mare, Ardair Skoda. The two of them got along very well and they came along so nicely in training that we planned for them to start in their first 40km at Rockybar, where I planned to do my next 80km with the new horse we had in training.

Haze went home on the 28th of March. I was heartbroken, but I knew that it was just too easy to keep riding the seasoned horse while the young ones stayed fat in the paddock so I had to remove the temptation. It isn’t like I would never see Haze again, he would be at Rockybar in preparation for the 50th Tom Quilty later in the year.

We had gotten into the year with one hell of a swing, things were going pretty damn well! I was two rides through novice, Jas had made it through her first 80km completion at Cooyar, Adriana had made a brave call on Sally at the ride and I couldn’t imagine a better outcome – the future was looking bright! Little did I know that tings were going to come crashing down around my ears in a short space of time...

Posted by Endurance.Net at 1:16 PM