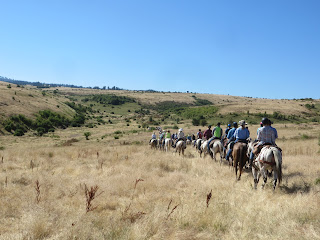 After some very last minute changes, plan C or D was scrapped, and Peanut and I set out for the 54th Annual Chief Joseph Trail Ride on Sunday July 22. Peanut, aka HH Storm Runner, is 6 now but this whole CJ experience would be very new to him. The "new" plan, since Lynn Welborn's horse had gotten injured on the 21st, was bring Peanut, and she could ride him a couple days and I could drive etc.

This years trail would be the only loop where assembly and destination camps are the same, as that is what the Nez Perce did during their flight from Gen. Howard in 1877. Tolo was an encampment often used by the Nez Perce in the 1800's, and they would race their horses on the prairies and hunt. Our route would take us down into Hells Canyon and back up again twice during the loop.

I rode day one as we left Tolo Lake and headed out around wheat fields that were once Camas prairies, and down ravines into the timber. We were treated to a big herd of elk right after Chip's wife said, "this looks like a great place for elk!" Boom there they were, haha!...

Posted by Endurance.Net at 1:23 PM