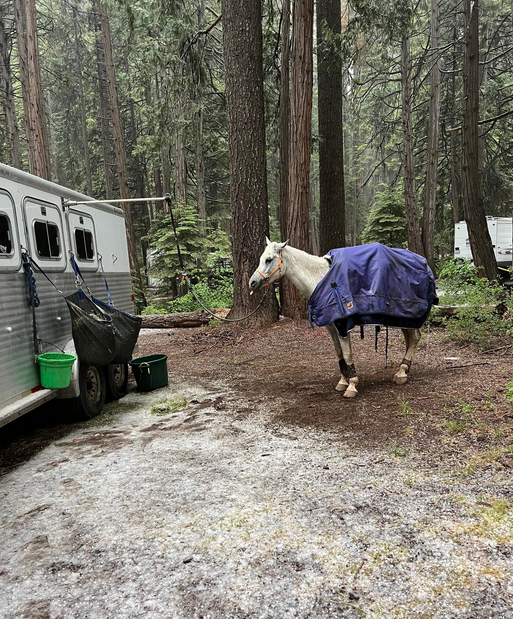 It was day 2 @ Wild West Ride… Niño and I headed down to the start. He trotted out quietly and behind most all of the other riders. After a few miles, there was a spotter on the trail for the sharp left turn that took us up the single track. Normally there are just ribbons but they’d mentioned at the riders’ meeting how there might be a few extra helpers on trail!

We made our way up the switchbacks with Carrie Ellinwood riding in front and another Kerrie who was riding behind us! The first Carrie was on an incredibly beautiful flea bitten Arab named Jamboree and oh boy was he impressive. I’d commented to her at the start how they looked like they were entering the Dressage show ring, poised, collected, balanced and he was such a beautiful mover. He was all business too, very serious and focused, which I could tell from the get go. They plan to ride the Tevis this year and I can envision them sailing through the 100 mile course without issue.

The second Kerrie who was riding behind us was on a large Spotted gaited horse who was a big mover, animated and very forward. It was to be their first 50 miler and she had expressed some concerns about pacing him properly. Somehow Niño and I got sandwiched between the two and when we came upon a second spotter on the single track trail, he stood up from his chair and had us veer left instead of continuing straight. We all followed suit and continued on the single track that took us up and then more up. We climbed for at least a few miles, until we reached the very top and I sensed something was wrong, even though there were ribbons once we had reached the ridge.

We made a left turn that seemed poorly marked, but it put the ribbons correctly on our right side; however in my heart, I had that icky feeling that something wasn’t right. The marking had been excellent on this ride with three ribbons at every turn but there also was no where that we could have gotten off trail. We trotted on for a few more miles before reaching another intersection and the infamous water tanks along with the trail that would take us back to camp. I then declared… I’m going back… this is wrong!! I thought to myself… ride management will kill me if I show up in camp like I did last year. In fact on day 1 they had even placed a sign out there for me saying… Nina don’t go this way!!! And mind you I was so careful and never got lost!!!

As I reminisced about all we had done, I really felt like we shouldn’t have climbed the big mountain because I remembered comparing the first loop to the prior day’s loop, which shared some common trail early on. I knew that I had never ridden that up that single track climb.

While none of it made any sense, I wanted to go back down the mountain, which we had just climbed and the girls were reluctant with my thinking out loud. After a bit of back and fourth on the ridge we all agreed to stay together and make our way back down the single track.

When we got all the way back to where the volunteer was who had told us to go that way, he was still there and he said… Oh you were supposed to go straight here (which was now a left turn for us). I questioned him in disbelief and he said… I didn’t know that earlier, but now I’ve just confirmed it as he held up a phone or radio… 😳 We kinda all looked at each other …cleared our throats and thanked him kindly! I did ask him what his name was and he said Glen, but ends up no one knew who he was 🙄

Onwards we continued and finally made it to the first water troughs where Bob asked if we had been lost… The LD riders were already coming through so we were behind for sure! I also explained to Bob that I didn’t dare ride back to camp 😂 He gave me a smirk and admired my good decision but he also shook his head in disbelief for what had happened to us.

Niño and I took some time and then continued on after I gave him a snack baggie full of mash and he enjoyed a long drink along with a few bites of hay. We thanked them for the great hospitality and continued. It wasn’t long before we caught up with Carrie and Jam and we rode the lollipop together, making our way back to the troughs again and then on into camp for the lunch hold. My gps had us at 29 miles for the first loop… double ugh 😩

Niño vetted through easily and we enjoyed the hour break and then headed out onto the second loop by ourselves. It was beautiful, familiar and I felt worry free. Soon after, Carrie and Jam caught us and we again rode together. She had me laughing so hard I nearly pee’d my pants. The skies got dark and the air was cool. Carrie said that hopefully we wouldn’t see anymore volunteers and that phrase stuck with me throughout 😂

Soon the thunder began to rumble and a few sprinkles dropped from the sky. Carrie said it wasn’t looking good weather wise and then she mentioned something about lightening and forest fires. My PTS clicked in on high alert and soon I was terrified. We made it back to camp, vetted through, but before getting back to the rig for our 1/2 hr hold, the skies opened up and an icy cold downpour came and drenched us. Soon it was followed by a wicked hail storm with icy rocks pelting down on us like an angry Mother Nature who then threw in some wet snow. It was wild… Needless to say my poor Niño was not a happy camper. It broke my heart to have had him work so hard and now to see him being pelted with ice and the sudden bitter cold. I threw three layers of blankets on him and then went to ask management what should we do… ?? Bob quickly reminded me “That’s why it’s called endurance!”. I walked back to my rig and threw the towel in. I couldn’t do it to my horse. We called it quits.

I got my saddle off Niño, put lots of warm blankets and a raincoat on top and then tucked myself in the camper. Soon the Ride management graciously came to ask if we’d like to continue? Oh hell no, I replied. I wouldn’t do that to my horse nor to myself. We took a rider option instead and I think we made a great decision. The storm moved on almost as quickly as it arrived but I had chosen to pack and leave early the following morning. I’d had enough and mostly I wanted Niño to keep his happy spirits.

With all the challenges, it was still a wonderful experience and a gorgeous ride. Kudos to management for their commitment and ability to keep everything running as smoothly as possible.
Posted by Endurance.Net at 2:00 PM