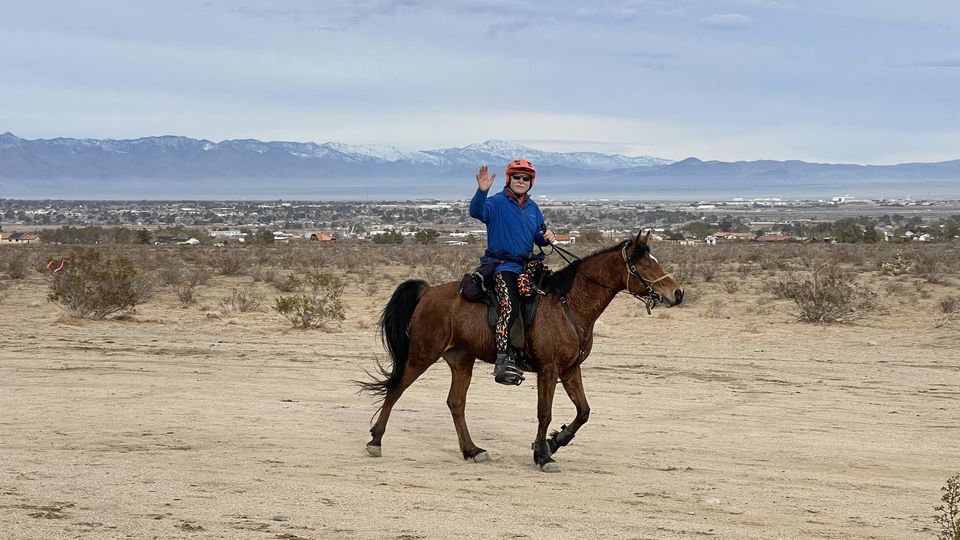 The annual Fire Mountain ride in Ridgecrest, Ca, was a different animal this year. For those of you who know (and love) the desert, you know it can be fickle. Sometimes very fickle. Sometimes REALLY fickle! In the summer, it’s pretty straightforward: it’s just hot. The winter, however, can give you any weather there is. It can range from 70 degrees and sunny in the dead of winter, to, well, like it was for part of the ride week.

California has been blessed/suffering with crazy rain this winter, which is a good thing, and really sucks at the same time. we have had about a foot of rain so far at home this year. I got a break in the rain to drive my dirt bike, Sorsha, and Ines’s horse Rayos down to Ridgecrest on Sunday a week before the ride. It was a beautiful, pleasant, calm drive down. Monday morning did not help as the rain started. It was light to mild, and no wind, so Brian and I spent the day in the side by side marking the trail. We got about 35 miles done, which was good, but we were very wet and very cold for a long time. Tuesday hit with a vengeance! Big wind, pouring rain, and a thunder clap that was so close it shook the big metal cover at the arena enough to scare me. This was not weather to go out and mark trail, so we switched to the truck and tried to do water troughs. That mostly worked until we were driving up a wash/road that had water coming down it. This is not safe! We got most of the water troughs out, but the intense rain and wind pretty much killed the day. It was serious rain: flash-flood caliber rain. The weather broke Tuesday night and the rain slowed down, so we got started again on Wednesday. The first thing we noticed was the rain had of course wiped out the chalk arrows on the ground. 35 miles of arrows gone! Great! We had 70 more miles to mark. We got about 60 done, but the sun was setting as we finished in the freezing cold. Lucky for me “Sandwash” Ali Woodward and her husband Dan came with the dirt bikes to help. They spent Thursday riding and re-chalking the 35 miles we had done before the big rain. I went back out on the bike and finished up the remaining 15 miles or so and checked part of the trail we did on Wednesday. I also had to go put up all the road crossing signs as well as some key trail split signs. I was not able to switch to horse rider until Thursday afternoon when Ines and I went for our pre-ride ride on the horses.

On Friday morning, for day one, the desert was our friend. Perfect weather- low in the low 40s, highs in the high 50s. Bright sun, zero breeze, perfect, wet desert. It was just glorious! The riders who got to ride Friday had a real treat. I rode Sorsha along with Ines on the fifty to sixth place. The conditions were stunning! The Tuesday rain floods had wiped the desert clean, and all the slop had soaked in. The roads with the huge bumps and ruts were as flat as a freeway with perfect footing. You can’t buy footing this good. There was so much water out there that we did not really need a single trough. It was a perfect day with one exception- my lower left leg hurt. It’s one of my same old injuries that I just deal with, but this was different. It hurt a lot while riding, and I could barely get off the horse without collapsing to the ground. When this happens, I usually get off and walk it off, which usually helps, but I could not really walk. I could not trot the horse in the vet checks either. At the end of the fifty I could barely walk. Okay, Okay, my body was telling me something. I limped around that evening and knew I was not riding Saturday to the Pinnacles. I opted to sit it out and help with the ride. Which turned out to be a good thing, sort of. Saturday morning was pretty nice. The forecast called for some light rain in the afternoon, but nothing serious like on Tuesday. The ride was special- it was going to the Trona Pinnacles which has never been done in a ride before. The 25 ended right there and the riders were trailed back, while it was the lunch stop for the 55-mile riders. I went out to the away vet check to help out. All the LD and 55’s came through on their way out, in nice weather and all in good spirits. It was a little breezy, and overcast, and a little cold, but not too bad, and certainly good riding weather. I left around 2 pm to get back to camp so I could go out on the trail backwards in the side by side to hang glow bars on the last 13 miles or so of the trail for the 55s. It was on the way back in the car that it started. The wind picked up, the sky got dark, the temperature dropped, and the rain started. Lightly at first, but then it started coming down. The hard stuff, with about 40 degrees and 30 plus MPH of wind. It was MISERABLE in the side by side as I went backwards on the trail. I was soaked, cold, freezing, but kept thinking about those riders out there. Yeah. I came across the leader, Jessica Black, at about 4pm and it was almost dark. She said she was so ready for this to be over. I could not agree more. Lori Olsen came by in second on Fargo- she said it was hell. They were slogging through water in the desert! Rachael Muira came by next and said it was ugly! The next group was Carolyn Hock and her group of three. All were walking through the slop in the howling, 30 MPH wind with the rain coming down sideways, in 40 degrees, with wind chill factor, by the way, is 18 degrees Fahrenheit! I said hi, how are you, etc, etc, and there was silence. Carolyn said, and I quote, “this is endurance!” You got that right, Carolyn.

I made it back to the vet check just before dark, where I immediately got into Gretchen’s truck and turned on the heater up high. Those riders out there were not getting that luxury! After a while I got out as Ines, Ali, and Vanessa arrived. They were soaked, freezing, and in good spirits, but did not want to hang around. The vets wisely shortened the hold to “Get out of here!” so the horses would not have to stand around in that freezing slop. All of the blankets everyone brought were soaked. We hung around until the last of the riders on the 55 arrived as it was getting dark. We got them through and back into the miserable conditions. It’s a good thing I put up the glow bars! Brian drove the side by side back a while ago, so I happily drove the warm truck back to camp and tried to continue to dry out by the fire, under the big metal awning, in the pouring rain. The riders were trickling in and were really, really glad to be done. I got a call from Lynn Marks, who finished in 11th place, that they were at one intersection that was missing a glow bar and it took them a while to figure it out. I donned the wet jacket and hopped back in to the side by side and went back out there to fix it. Sure enough, there was a turn split that if you went left it was wrong, and the correct way had the glow bar too far down the trail. I missed that one having marked it going backwards. I fixed it and kept going a bit and finally ran into the last group of riders who were just trudging down the river that used to be a road. They thanked me for being out there to help them. I said you guys are the tough ones. The roads were washes with water running down them, and there was standing water everywhere. I finally got turned around and had a hard time seeing due to how hard it was raining. I crossed a wash that crossed the trail that was not there on my way up. This is nuts. I stopped and called Gretchen and Brian and suggested we best cancel the third day. It was insane out here, and we could not guarantee the trail was safe for the next day. The decision was made to cancel day three since the rain was supposed to let up, but it was also supposed to be light all day today. I got back to camp just before the final riders made it in. I don’t remember a hot shower ever feeling that good.

Congratulations to the 20 riders who finished the 55 in some of the worst horse-riding conditions I have ever seen in the desert. The riders had to slog through a mile and a half of an alkali road that went from soft, perfect footing, to paste that the poor horses sunk into. That cost everyone an hour or more. Not one of those guys pulled a rider option out at the last vet check in the miserable conditions. They all soldered on to the finish. I’m listing them all here, and am also sending them each a special “I survived the 2023 Fire Mountain Pinnacles ride from hell!” award. They earned it.

Most everyone enjoyed the new ride, and the reviews were great for the Pinnacles. Until all hell broke loose with the weather for those guys on the 55. The trailering back the horses from the finish worked out well, no one got lost, and my 3-mile section of virgin trail was pretty cool. The Ride With GPS demo/trial worked well on Friday- Ines and I used it and I was quite happy with how it worked. Several people tried it and gave me positive feedback. I’ll continue to support it going forward. Of course it was not very valuable on Saturday. You could not hear the voice cues from the wind. And who in their right mind is going to pull out their phone when they are freezing in the pouring rain? It would be a valuable aid in the event of getting lost.

Also, a special congratulations to Molly Farkas. Can you believe she survived this 55-mile ride from hell to become the newest Century club rider? She’s 80 and her horse is 20. There are no words for this accomplishment. Hat’s off, Molly. You are amazing.

PS: I FINALLY went to the doctor this week and it looks like I have a pretty bad shin splint in my lower left leg. Figures, but I deserve it for being a guy and ignoring it for a couple of years. I’ll be off the horse till spring, but will certainly be at 20 Mule Team helping. It better not rain, or I’ll probably hang out in a hotel!

PSS: While taking the trail down on Sunday I found lots of trail damage, all the chalk arrows were of course gone, and the trail spilt signs were down. I was bummed about having to cancel the night before, but not the day after. There is always next year!