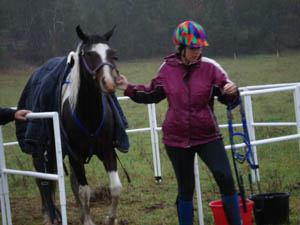 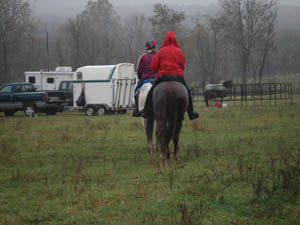 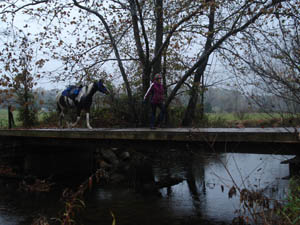 I didnt want to crawl out of my nice warm sleeping bag. I didn't even want to ride. I was having pre-ride jitters.
This would be my second LD ride if I managed to get on my horse.

My friend Karen had fed the horses at 6 a.m. and so I all had to do was decide what to wear and to saddle my horse.
The fine misting rain made everything all drippy, including the horses and I told Karen that 'we don't HAVE to do this' and she retorted 'we didnt do all of that conditioning for nothing, we are going to do this ride!'

I took in a long slow deep breath and turned my focus on getting Falcon ready. The darkness quickly turned into daylight with omnious clouds hovering overhead. By 7:30 we were mounted and warming the horses up. Falcon, a 5 y/o arab/paint cross was fairly relaxed/if not sleepy.

At 7:55 we checked in and waited for the start. A "controlled" start?!!!! NOT what I considered controlled. We started out in the middle of the pack. Horses were prancing and cantering and trotting along behind the lead vehicle and I had a major panic attack as I saw some horses slipping on the sleek wet pavement. We crossed a cement bridge and thankfully Falcon was more focused on the other horses.

Falcon, by this time was almost out of control, prancing and dancing sideways like a dressage horse as we all swept up the pavement...then aaah, a right turn onto a gravel road, much safer footing...and we cantered and trotted and moved our way towards the front of the pack.

Soon Karen and Red caught up to us and we went single file up a rocky trail over Milford Gap. The trail down the other side was rocky, wet and narrow. A rock ledge bordered the right with a sharp incline. Falcon maneuvered the trail well, head down, looking for rocks. Several times he stumbled and I flew up out of the saddle, losing my right stirrup and noted to myself that I needed to shorten that stirrup at the next water stop.

The rain began to deluge us now and water squished out of my moisture wicking tights everytime I hit the saddle. Yeeee Hah!
We came apon a wonderful grassy road and Falcon took off at a canter, on and on we went taking the lead for a while. He wanted to gallop, but we had miles to go and so I tugged on him to slow down (with little success) When we reached the gravel road along the Shenandoah river he set in to a more steady pace.

Soon we reached the ascent back up the mountain on another narrow and rocky trail. We climbed slowly and were soon overtaken by 5 other riders who we let pass. The warmth and steam rising from the passing horses made a great cloud to settle in over us. I thought we would never reach the top.

It was on this trail that we saw the BEAUTIFUL FALL FOLIAGE that ride management had spoken of. It was absolutely breathtaking. Then as we crested the top, the view of the Shenandoah valley once again took my breath away.

Once again a downpour enveloped us then lightened as we crossed back in to Fort Valley. We sped back down the trail and ended up at the first Vet Check in 7th place and all A's.

Karens daughter brought us hot Chicken Noodle Soup while friends took care of the horses for us. Karen's time out was about 4 min. later than mine, but since she was riding my horse and she is my friend, I waited for her. Karen needed some motivation to get going again, but soon we were back out on the trail at 1201.

Up the road we went, trot, trot, trot, squish, squish, squish. And DARN we missed the first turn and had to backtrack what seemed to be a mile. After that we stayed on trail. But I hated that loop for the most part. All winding through the woods and taking so many turns that my mind was in a whirl and I couldnt place what direction we were going in my head.

Up steep hills, down hills, more rain, trotting, galloping, squish, squish, squish. At a creek, Falcon stopped to drink and drink, then led 3 other horses up the rock creekbed, surefooted as ever. Man, I am glad he takes care of himself.

Finally Red took the lead with some urging from Karen. When we reached the hayfields Falcon decided it was time for a good buck or two, but I quickly caught on and yanked his head up. From there we had a belly deep water crossing. We LOVED that. Falcon didnt want to get out of the creek...as if we werent wet enough already.

One more short steep climb, then good trails to home. YEAHHH!. We had done the 12 miles in less than 2 hours. I walked Falcon in to the Vet, but he was too excited to be back 'home' and whinnied at anyone who would talk to him...not getting his heart rate down to 60.

Judy Ricci, his trainer was close by and came over to help...stuffing some electrolytes in his begrudging mouth and sponging him down for me. Then time for the vet. I was so excited, since we had come in next to last in the Virginia Highlands ride. We finished in the middle of the pack this time and could have placed a little higher had we not left 6 min. late and then gotten lost. And to think that I wanted to quit just because of a little rain!

It was an AWESOME ride.

And the sun came out just as the Vet called out 'overall A'! What an AWESOME AWSOME DAY!