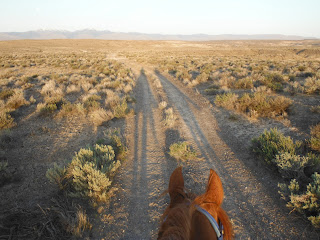 Deja Vu!! Back in Oreana, ID at the Tough Sucker ride in April. The only difference was in 2012 there were 4 entries on the 75, this year there were two. Sad but I really wanted to do the 75. At least I had someone to ride with, Trish Frahm and I were riding it together. Last year Thunder and I did the whole thing by ourselves.

The almost full moon was going down

The sun was coming up

The shadows were long as we were the only horses and riders trotting around the desert surrounded by the Owyhees...