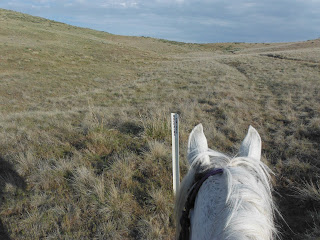 The 2013 Eagle Extreme Endurance Ride was certainly extreme as there appears to be a heat wave passing through setting record high temperatures. I heard it was 93 which for May 11 is pretty dang hot.

It wasn't a big turnout, 3 on the 75 and 15 on the 50 miler with 15 on the 25 mile LD. A lot of trail riders came for the day too. I was riding Blue with my friend Tamara Baysinger. Tamara was starting her new horse on his first 50 and I had said I'd take Blue along to keep her company. Always helps a green horse to have an experienced trail buddy.

Our first loop went out through the sagebrush and we climbed up to the edge of Rocky Canyon as the sun was coming up. It's a couple hundred feet deep and has the notoriety of being a murder site a few years back when a guy pushed his wife over the cliff. Her friends put up a cross in her memory.

At the 12 mile point I thought I'd put Blue's interference boots on his hind legs. I was sure he would have settled down enough for that but about 200 yards later we had a bit of a rodeo...