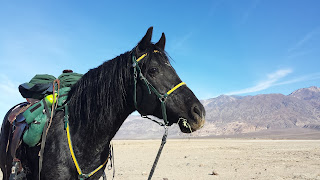 I have to start with a bit about the trip to the ride itself.

Demon and Hoss started fussing under the divider with each other almost immediately upon loading. I tied them both, not short, but enough to prevent any real reaching under the divider. The trip was uneventful until we stopped at the Walmart in Adelanto. I was sitting in the cab clearing my notifications when the trailer started rocking. Demon has in the past been known to start pawing mindlessly, and I assumed it was him acting up when I hollered and went back to see what was up. I climbed up on the side of the trailer and looked in at Demon, who gave me a wide-eyed look and tilted his head toward Hoss.

At this point I noticed Hoss's hind leg did not look quite right. There is no way it should be at quite that angle. In a bit of a panic, I ran back and opened the gate.

Hoss was sitting on his butt like a dog, held up by his lead rope just enough to prevent him from tucking his front legs. He immediately tried to exit the trailer, but his head was still tied. His foot hit the spigot on the 55 gallon drum, opening it and creating a flood of water in the midst of his predicament. I yelled at him to whoa, and ran around to untie him. Once he was freed, I told him to come on out and he was able to get out of the trailer and gain his feet with little trouble.

Letting my heart rate come down, I started asking Hoss to move about a little to make sure he was OK before re-loading him and heading on up the road. I was looking Hoss over when a car stopped and the most exuberantly excited young man (I'd say mid-20s at most) asked in the most breathlessly awed voice if he could have a picture with Hoss. I can honestly say I have never seen someone in this particular age group so enthused to meet a horse. Hoss was, of course, an incredible ambassador for his species and stood quietly for petting and to have his picture taken. I really wish I'd gotten a picture of those two young men with Hoss. It was truly enchanting and did quite a bit to distract me from the distressing situation we had so recently found ourselves in...