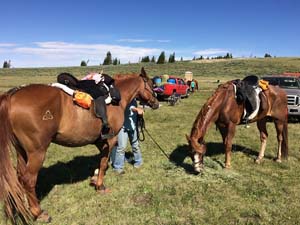 Me, I checked her AERC record (lightweight rider, nearly 5000 miles, with a high completion rate). I thought about her request. And, after a day or so, I wrote back to say “yes.”

I hoped to take my two horses to the 2016 Big Horn 100. Both horses are Big Horn 100 veterans and both are tough. They run well together and they had both demonstrated their fitness and competence at the Strawberry Fields ride in Utah three weeks before the Big Horn. However, I did not have a rider for my horse Rocky. One afternoon at Strawberry, I discreetly mentioned that I might be interested in finding a lightweight, competent rider for the Big Horn 100 to one of my friends.

Now, Whiskey, the wild mustang, and Rocky, the Craigslist Arabian, were off to Wyoming together. My friend Cindy, who was my partner on the 2011 XP and who helped Whiskey and me finish the 2014 Big Horn 100, had made arrangements to fly to Boise from Vermont and help me with the 2016 Big Horn 100.

I made some repairs to my van after driving to Utah and back for Strawberry. My two horses were fit. I had a crew. I had a partner for the ride. We were ready and drove east to Wyoming.

I arrived at ride camp on Thursday afternoon and enjoyed a very pleasant time with the camp hosts Mel and Sharon sharing conversation on the back patio of their house. Mel and Sharon are most gracious and open their lives to the Big Horn 100 riders and horses each summer.

Other riders began to arrive and we began to renew our friendships. I met riders, some who I saw at Strawberry just a few weeks ago, and some who I had not seen in a year or more. It was a special group that had gathered with their horses on a July weekend for a somewhat obscure event in northern Wyoming.

My riding partner arrived on Friday. We fit tack on Rocky, talked about the ride, went on a very short trail ride, and I was confident that I had made the right decision. Lancette was the right person to ride Rocky in the Big Horn 100.
Lancette traveled from Arizona to Wyoming with four friends – three planned to ride the Big Horn 100 and one would crew. During the afternoon we all talked about the trail, discussed our plans, and prepared for the 4:00 am start.
Early in the morning we were off and heading north across the badlands of Wyoming under the dark desert sky. Whiskey and Rocky were running well in the cool morning air. We were riding with Lancette’s friends and another friend Vicki. We were a well matched group as we headed up the Dugway trail and into the canyons.

The Dugway and the canyons may be my favorite part of the Big Horn trail. The trail is rugged and wild and the climbs are difficult. Some other riders saw a bear on the trail but we were content with the mountain scenery. Several times on the trail I was overwhelmed with the beauty, the horses, and the companionship, and I remarked, “In this moment of time, life is perfect.”

We arrived at the first vet check about twenty minutes behind my previous times. We had some minor boot problems because Rocky’s feet do not have a normal shape and the day was becoming hot. We had resolved the boot fit but the heat would slow the horses the rest of the day.

After the first vet check at Horse Creek, we were off across the Big Horn plateau past Antelope Butte and on to Shell Creek and the second vet check at Ranger Creek. We were still about twenty minutes behind pace. The modern course splits from the traditional course at Shell Creek just before the Ranger Creek vet check, and the modern course has multiple additional high-altitude climbs and descents on difficult footing. A summer squall came through just after the vet check at Ranger Creek and although the squall was windy and wet, it was short-lived and greatly cooled the temperatures.

Partway up the climb, the Big Horn 100 trail took a sharp turn to the left on a rough and rocky jeep trail. This was not good. I last followed that trail in 2006 and the extra climbs, descents, and rough footing contributed to my overtime finish. Also in 2006, I was pacing myself based on my experience on the traditional trail and I had not planned for the additional difficulties of the new trail which likewise contributed to my overtime finish.

The departure from the trail used in 2014 and 2015 had me worried about finishing in time and I voiced my concerns. Lancette said to me, “We are out here on the hundred and we will just ride the trail as presented” which was very good advice. We rode above timberline over the peaks and then down into the valleys. We descended hills too steep to ride and we crossed mountain streams. We climbed again to above timberline. We caught up with Peter Hommertzheim and some other riders and continued around the lakes and up the Shag Nasty. We saw wild turkeys on the trail. We urged the horses onward, hustling along the trail, and made it to the last vet check at Battle Creek just before dark. Our timing was looking better.

I have never quite learned how to move quickly on the trail after Battle Creek on the descent off the plateau to the Big Horn basin. It is usually dark, the footing is inconsistent and can be rough, and the horses are tired.
The crescent moon had yet to reach the first-quarter and we descended in the dark while a major thunderstorm raged off in the distance. The continuous flashes of lightning along the horizon added an element of drama that made our ride seem surreal. There is magic in the second half of a hundred.

Eventually, we made it off the mountain where our crew met us at Trapper Creek. The horses were thirsty and hungry. We paused for some time to let them eat and drink. Our timing was good and it looked like we could finish. We left for the last few miles across the badlands under a coal-black sky pierced by a million stars. Shooting stars streaked by overhead leading us to the finish.

We were caught by some other riders on the last mile or so into camp. Bruce Burnham, Bob Bischoff, and Dana Landale came up from behind. I told them that they could go on ahead but Bruce replied, “You have ridden in front of us all day and you will finish in front of us.” I looked over at Lancette as I said to my horse, “Whiskey, let’s take it on home, come on, let’s trot.” Whiskey and Rocky quickly picked up the trot and trotted side-by-side that last mile or so all the way back to camp. We finished eleventh and twelfth with two sound horses about one-half hour before the twenty-four-hour time limit.

Today, I am back in SW Idaho, my friends have dispersed across North America, my horses are resting at home, but my heart and my mind keep wandering back to the Big Horn mountains and trails of northern Wyoming.

Posted by Endurance.Net at 9:09 AM